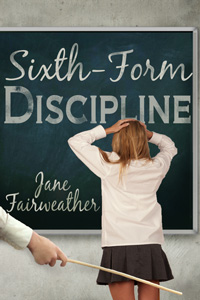 This book contains eight short stories in which misbehaving English Sixth Form schoolgirls find themselves on the receiving end of the dreaded cane or slipper.

On her eighteenth birthday the normally very naughty Kay finds herself in the headmistress’ study for something which was a genuine accident.

Ursula is a mistress at a boarding school which has recently admitted girls to its Sixth Form. She is very much against corporal punishment, at least until one of her favourite girls is about to be expelled for a particularly serious breach of school rules…

An Unlikely Alliance
When Valerie tries out for the netball team at her new school, a fight with one of the other players ensues and Valerie and her adversary find themselves before the headmistress.

Jane Swift, a Latin teacher at a mixed grammar school, finds herself involved in the disciplining of some very naughty senior girls.

One of Those Days

Two Sixth Form girls try to skip out of school on a very hot summer day, only to be caught and very firmly slippered by the headmistress.

The Mouse and the Slipper

Two Upper Sixth Form girls have failed important mock exams. The headmistress plans to cane them, but their teacher asks to slipper them herself in order to establish her authority.

Anne and Julia are snitched on by Imogen, and their house mistress comes to catch them smoking just as they are experimenting with sex. The consequences are severe, although they are at least spared being sent to the headmistress and expelled.

Imogen is in high favour with her house mistress for reporting the behaviour of Anne and Julia in the previous story. However, Imogen becomes worried that caning Anne and Julia was beyond the house mistress’s powers and Imogen foolishly reports her to the headmistress, who is not amused.

Publisher’s Note: While the stories in this book share a school setting, it is made clear in all of them that the characters are over the age of eighteen. In addition to realistic depictions of corporal punishment as it was used in English schools in past years, some of the stories also include sexual elements.

“Come over here and hold your right hand out about the height of your shoulder.”

“No. You surely don’t think I cane girls on their bottoms, do you?”

“I thought that was how it happened, miss.”

“Well, you are wrong there, Kay Johnson. I suppose it is so long since this had to be used that everyone has forgotten. Anyway hold out your right hand. I am going to give you three strokes on each hand.”

Kay did some rapid arithmetic and realized she was having six of the best. Oh dear, this really was scary. She gulped, held out her right hand and closed her eyes. She really did not want to see that thing coming at her. She felt Miss Thomson take her hand firmly and flatten it out. Her heart, which was already beating above its normal rate, raced even more wildly, and she began to weep. She wished she were anywhere else. She heard the swish of the cane and felt its sting.

She had never known anything that could hurt quite so much.

“Please keep your hand still. It will be easier for both of us if you do.”

She steadied herself and took a breath. The cane came down even harder.

“Last one on this hand.”

She clenched her fist hard. She had to take this. She had to. She opened her hand. The cane came down and hurt, but not quite as much as the first two strokes. She clenched it hard again. She very reluctantly held out her left hand. Again Miss Thomson adjusted it. The fourth stroke must have been perfectly timed, for she found herself howling at the top of her voice and pleading for it to stop.

“Lean over the desk. I am going to finish your punishment on the back of your legs. If there is any more fuss, you will be held, and there will be extra strokes.”

Kay decided that in its way, this was quite kind of Miss Thomson. She reached over the desk, shut her eyes, and gritted her teeth. As she bent over just as she had feared her suspenders popped. She felt with gathering panic her slip and skirt being pulled out of the way.