A Concubine for the Trillionaire by Emily Tilton 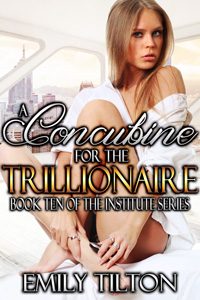 When eighteen-year-old Alice Henning is taken from her college by an Institute trainer named Chris Sandoe, she soon finds herself naked and blushing with her bright-red, well-spanked bottom on display as she learns what it means to be properly mastered by a firm, dominant man.

Alice will be no ordinary concubine, however. The Institute has given her to Eric Gadden, one of the richest men in the world, as part of a secret plan to curb his sinister influence. Her new owner quickly proves more than ready to punish her thoroughly for any disobedience, but even as he claims her beautiful body in any way he pleases, Alice cannot help wondering what it would be like to belong to Chris instead.

Though he intended to do his part in Alice’s training without growing attached, Chris’ need to protect her grows stronger by the day. When it becomes clear that Eric is far more menacing than anyone realized and Alice’s life may be in danger, will Chris risk everything to save her?

His hand had stopped rubbing, and merely held her bottom, making her whimper, but now the awful rubbing started again, as he spoke more of his terrible words.

“Your owner will enjoy giving you the discipline you need, too, honey. I want you to try to remember that, because otherwise you’re not going to understand what your new life really means.”

“Questions are for after your spanking, honey,” Master Chris said, and then he took even firmer hold of her naked waist, and the hand departed from her bottom. Alice cried out, and out of sheer panic tried again to get away, to get off his lap. She kicked, not caring that he would see her private parts, but his hand came down very hard anyway, with a sharp sound and a sharper sting. Then, so unlike Professor Reston’s measured paddling in front of the class and so unlike the largely symbolic spankings at home, he kept spanking though Alice’s hips writhed across his thighs until only a few moments later he effortlessly put his right leg over the backs of her legs to hold her in place.

After that, he just kept spanking, as Alice screamed and cried and finally begged. Her bare bottom clenched and unclenched uncontrollably as she learned her painful lesson over a man’s knee. He held her there, and he spanked her hard and fast.

“Please, no more… please… it hurts so much.” Her poor bottom, punished so thoroughly, left, right, and center, seemed to glow like a furnace, for her correction and for Master Chris’ enjoyment.

What did it mean, that he liked to spank her? That her owner would take pleasure in spanking her pretty bottom? A husband spanked a wife for her own good. It hurt him to have to punish her more than it hurt her to feel his big hand correcting her. A husband spanked compassionately, when a girl couldn’t behave herself properly, and then later he took his pleasure in their bedroom.

He instructed his wife to take off her clothes because the time had come for him to know her, in their bed. Their private parts would come together, and he would touch the place only he was permitted to touch, down there. He would question her closely about her hygiene, and whether she felt strange down there when he spanked her—as he must often do, because she needed it. She would confess that she did feel funny, especially afterward, and he would say that it was only natural, that it was her body telling her how important it was to submit to him. That he didn’t like to spank her, but that it made him ready for her, too: ready to know her with her knees apart and his strong body atop hers, enjoying her as a husband enjoys his wife when the manly need comes upon him.

“Please,” she sobbed. He liked it. He liked bringing his hand down so hard, so that Alice felt she couldn’t bear it anymore. That must mean that under her hips, somewhere, this man, this Master Chris, was ready for her, as a husband becomes ready to know his wife. And Alice knew with a thrill of shame too great to contemplate for more than the blink of an eye that when he had finished spanking her she would be ready, too, because her wickedness knew no bounds. She had to stop it somehow: she had to. She cried out, “Please… Master… Master… please…”

He stopped. “Good girl,” he said, much more quietly than he had spoken before. “Good girl. Master is what you must call me, now.”

2017-01-01
+admin
Previous: Emma’s Surrender by Amelia Smarts
Next: The Laird and the Sassenach by Ashe Barker