The Orphan Bride by Chula Stone 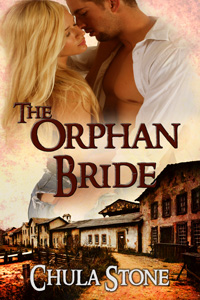 For years Ally has lived alone in the rugged lands outside the walls of a community called The Ridge, the only patch of civilization left in this part of what was once the state of Texas. Taught from childhood to trust no one—especially no man—and to do what she must to survive, she lives by foraging and, when the chance arises, petty theft from the people of The Ridge. Until the day she is caught by Josh McAllen, and her life is thrown into chaos…

After a firm spanking on the spot, she is dragged back to The Ridge against her will and brought before the council to answer for her years of stealing, and before she knows it she finds herself not only an unwilling new citizen of The Ridge, but also the reluctant wife of the very man who captured her.

To Ally’s surprise, her new husband proves to be more than a gentleman, and he does not force himself upon her. On the other hand, however, he takes his duties as her husband seriously. When Ally returns to her thieving ways she quickly learns that in the community of The Ridge, naughty wives are dealt with firmly. As this wayward bride stands naked before her husband, awaiting his chastisement, she begins to feel something for him that she has never experienced before. In time she begins to crave his loving caress, and though she blushes to admit it, his firm hand as well. As her fears melt away in the heat of her need for him, she awaits the moment when he will seal their bond and claim her forever as his own.

Publisher’s Note: The Orphan Bride contains both consensual and non-consensual spankings of an adult woman, including domestic discipline. If such material offends you, please don’t buy this book.

“You’re going to cut a switch.”

“Just like you are, you’re going to go to the courtyard out back and cut a switch. No one will see, but I want you to follow my instructions, no matter how hard it may be.” He let her up and their eyes met again. “You’ve got to learn that stealing is wrong. I’ve got to make this punishment count.”

Her eyes fell to the floor before she turned toward the back door. She could feel his eyes on her bare body as he followed her into the sheltered courtyard where he grew a few vegetables in summer. There was a small apple tree with shoots about as thick as her pinkie growing from the base. She knew without being told that this was where he wanted her to go. She stood in front of the tree, but couldn’t bring herself to ask how she was supposed to cut the switch. Somehow she was not surprised when he handed her the very knife she had secreted away only hours before.

“Use this, but be careful. It’s sharp. Get one of those new little trees growing there from the roots. Those are supposed to be pruned anyway.”

She took the handle of the knife in her hand, bent over at the waist and applied the blade to the base of the thin sapling. Sawing back and forth, the knife only took a moment to slice through. She glanced up at him, then away, holding out the knife and the switch.

“Trim the leaves off.”

She complied as quickly as she could, asking, “Please, can I do this inside?”

“Nobody can see you.”

“Nobody but you! It’s just too hard, being out here like this.”

“Once the leaves are off, we can go in.”

When she was done, she showed him the switch.

“Turn around.” He held the switch at an angle that made it perfectly clear to her what he had in mind.

2013-06-03
+admin
Previous: Taken by the Beast by Natasha Knight
Next: Correcting Kathy by Patricia Green