A Gift for the Commander by Sara Fields 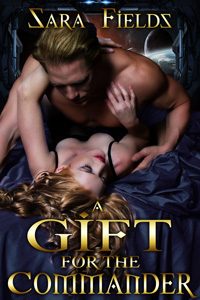 Though Olivia is grateful to be alive after she is rescued from a terrible tyrant and brought to the planet Terranovum, she is none too pleased when she learns that she is to be auctioned as a slave to the highest bidder. But before she can be sold, she must be trained, and the man who will train her is none other than the commander of the king’s army.

Wes has tamed many human slaves and when the beautiful, feisty girl resists his efforts to bathe her in preparation for her initial inspection, he strips her bare and spanks her soundly. The stern chastisement leaves her tearful and repentant yet undeniably aroused, and Wes begins Olivia’s lessons in submission by making her beg him shamefully for the release her body needs so badly.

Once she has been thoroughly and intimately examined, Olivia’s training begins in earnest, and Wes takes her to his bed to teach her what it means to surrender her body to a dominant man. But try as he might, he cannot bring himself to see Olivia as just another slave. She touches his heart in a way he has not felt in years, and with each passing day he grows more certain that he must claim her as his own. But with war breaking out across Terranovum, will Wes be able to protect both his world and his woman?

Frenzied, her moans shortened into breathy pants. She was almost there, almost, just a second longer. He just needed to press a little harder and she would find her pleasure.

Without warning, Wes moved his fingers away from her clit before edging backwards, leaving her feeling achy with unreleased desire. As her body calmed, his fingers moved back to her clit, circling it again until she was practically gasping for breath. Her fingers grabbed at his ankles and she held on for dear life. One more second and she would be there. Just one more moment of pressure. Just one. Oh, god.

He took his hand away again. Shock bathed her like a bucket of cold water. Desperation overtook her mind, and before she could stop herself, she opened her mouth and began to beg. “Please, sir, please don’t stop!”

“Ahhhh, so my kitten wants to come?”

“Yes, sir, please,” she cried out, no longer caring that everyone in the room was probably watching her wild and lusty display. The only thing on her mind was the unbearable tension that was taking over her every nerve, pleading for relief, whatever the cost. Twisting backwards, she turned her eyes to meet his, and saw the raw power in his gaze. Her pussy clenched at just the sight. Her tummy leapt into her throat as she realized what he wanted.

“Yes, your kitten would like to come. Please, let me come, sir.”

A triumphant smile growing larger by the second glimmered at the corners of his mouth as she submitted to him.

“Because you begged so prettily, you may come.”

Without a second’s pause, his hand returned to stroke her needy flesh, coiling the tension inside her to unbearable levels. She moaned as her hips rolled toward his thighs, his fingers moving up and down and all around her clit, until finally, everything inside her snapped and the only thing she knew was pleasure. The world before her eyes went white hot as he pressed her further into her lust. He held her tight as she rode his fingertips, her breathing sounding loud as it intermingled with high-pitched moans.

After it was all over and her body finally came under her control again, Wes clapped his palm over her pussy and held it there as she cried out at his mark of ownership. His entire hand spanned from her clit to all the way to the back, where his thumb rested over her bottom hole.

She hadn’t ever been touched there before. It felt especially naughty, but oddly tantalizing. Her entire body stilled at the silent threat he posed as his thumb pressed down firmly on her tight rosette. There was no question regarding his intent. She stilled and waited to see what he would do next.

“Olivia, it is time for your bath. Come, let me help you stand up. We need to get you thoroughly cleaned, both inside and out so that you are ready for your examination.”

2016-07-23
+admin
Previous: The Warrior’s Property by Vonna Harper
Next: Mated to the Beast by Grace Goodwin