A Gift for the King by Sara Fields 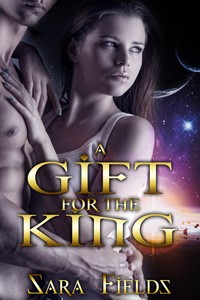 For an ordinary twenty-two-year-old college student like Lana, the idea of being kidnapped from Earth by aliens would have sounded absurd… until the day it happened. As Lana quickly discovers, however, her abduction is not even the most alarming part of her situation. To her shock, she soon learns that she is to be stripped naked and sold as a slave to the highest bidder.

When she resists the intimate, deeply humiliating procedures necessary to prepare her for the auction, Lana merely earns herself a long, hard, bare-bottom spanking, but her passionate defiance catches the attention of her captor and results in a change in his plans. Instead of being sold, Lana will be given as a gift to Dante, the region’s powerful king.

Dante makes it abundantly clear that he will expect absolute obedience and that any misbehavior will be dealt with sternly, yet in spite of everything Lana cannot help feeling safe and cared for in the handsome ruler’s arms. Even when Dante’s punishments leave her with flaming cheeks and a bottom sore from more than just a spanking, it only sets her desire for him burning hotter.

But though Dante’s dominant lovemaking brings her pleasure beyond anything she ever imagined, Lana fears she may never be more than a plaything to him, and her fears soon lead to rebellion. When an escape attempt goes awry and she is captured by Dante’s most dangerous enemy, she is left to wonder if her master cares for her enough to come to her rescue. Will the king risk everything to reclaim what is his, and if he does bring his human girl home safe and sound, can he find a way to teach Lana once and for all that she belongs to him completely?

“I need you to remove your clothes now.”

Lana looked at her, confused, if not defiant. She shook her head and instead started asking her questions.

“Who are these people? Why have we been brought here? Where are we?” Lana cried out frantically. Her desperation increased with the sound of her voice. The attendant shook her head urgently, trying to quiet the girl, and her eyes flickered over Lana’s shoulder. Lana looked back and the blond man was marching toward them. She turned to run, but her body stilled, his strange power suddenly coming over her again. Her muscles felt like cement, frozen solid.

He grabbed her, spun her around, placed his foot on the ledge of the pool, and threw her over his leg so that she was jackknifed over his firm thigh, her bottom high in the air. Shock radiated through her at the sudden attack. He smacked her ass a few times before Lana knew what was really happening. He was spanking her, for God’s sake!

When her disbelief eventually wore off, Lana realized how much her bottom was burning and that his spanks actually, really hurt. The room was silent, and the sounds rang out through the room, echoing with every smack. She cried out as the spanks got harder. Pausing, the man reached underneath her torso and unbuttoned her jeans. She tried to fight, but he quickly tore them down so that her panty-clad bottom was on display for everyone in the room. A blush crept over her face. She couldn’t believe this!

He spanked her soundly with his hand until she stopped trying to fight him. He then pulled her panties down, baring her bottom to the entire room. She cried out in shame. Lana’s poor bottom was on fire; she couldn’t remember the last time she had been spanked. It hurt, and it hurt a lot. She kicked and tried to fight, but his spanks met the mark every time. His other hand held her firmly against his leg, and she realized that escape was impossible. When he next focused on the tops of her thighs, tears came unbidden. Her body submitted to his painful assault, and she began to cry.

She felt him stop, and his hand glided over her punished skin. She slowly calmed as he held her there, secure over his knee. His hand rubbed her spanked flesh, bringing a small shred of relief to ease the pain. He helped her up and slowly began undressing her. She no longer fought, her red and punished bottom bare for all to see. She kept her eyes down, unsure of what to do as he pulled her jeans and panties off her legs, as well as her now-wrinkled t-shirt and bra.

When she was naked, he silently helped her climb into the water. His face was firm, but calm. The attendant got to work, and began to wash her hair and body.

The blond man stopped the attendant for a moment, gazing at Lana warmly, which was strange because he’d only seemed to glare at her thus far, almost like she had passed some sort of unique assessment of his.

“Take good care of this one. She’s special, meant for the king.”