A Husband’s Duty by Dinah McLeod 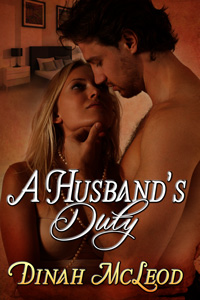 Now that she is finished with college, living in a nice house, and married to a handsome and devoted man, life seems to be going quite well for Jessica… except for one thing. Her wounded relationship with her younger sister Beth, torn apart years ago by a dispute over a high school sweetheart, has been allowed to fester for so long that she doubts it can ever be healed.

As much as he loves her, Jonathan is well aware that Jessica can be a stubborn brat from time to time. Fortunately he also knows the proper way to deal with a naughty wife: a good, hard, bare bottom spanking. When Jessica’s estranged sister Beth and her fiancé Zach visit for dinner, Jonathan demands that she treat them with civility and respect. Jessica does neither, and her disobedience and defiance earn her a painful and embarrassing spanking… with Beth and Zach still in the house and hearing every stinging swat.

Jessica’s chastisement is as shocking for Beth as it is for Jessica, and almost before she knows it she finds herself having a conversation she would never have expected with her own fiancé… a conversation that she quickly realizes could eventually lead to her own bottom being bared and firmly spanked.

Will Jessica’s sore backside motivate her to put aside her childish grudge and make amends with her sister, or will it push them further apart? Is Beth prepared to accept discipline when Zach feels it is necessary, or will the subject drive a wedge between them?

With loving hands, Jonathon pulled me to a standing position and gently bent me over the bed. My panties fell to my ankles, and I kicked them off irritably. I waited, drumming my toes on the carpet fretfully as he retrieved the strap from where he kept it buried deep in his dresser, behind his socks.

I felt him come up behind me, and I’d just buried my face into the pillow that he’d given me when the first stroke landed like a strike of lightening.

“Ahhhh!” I wailed loudly, thankful for the muffling of the pillow. I didn’t know what I’d do if the neighbors heard. Even if they didn’t call the police, having to deal with their knowing looks when I went outside to check the mail would be more than I could bear. I could practically feel the welt rising up from my flesh before Jonathon swung the strap again.

“Ow! That hurt!” I accused, raising my head to look at him.

His mouth was drawn into a tight line as he replied, “It’s supposed to hurt, Jess. That’s the point. I want it to hurt, so that next time we’re having an important conversation you will pay attention. Understand?”

“Whatever,” I mumbled, gasping in shock as my thighs were whipped three times in quick succession. I dissolved into a jittery bundle of tears. I felt him rub my back in an attempt to comfort me. I longed to shake his hand off, but I was afraid that if I did, he’d spank me more, and I didn’t think my thighs could take it.

“I swear,” he mused aloud. “How can a woman still be so sassy while getting her butt tanned? Is that just something about women, or are you special?”

I knew better than to reply. His touch no longer annoyed me, and I arched my back into his caress and leaned into his hard thigh. It crossed my mind that maybe, just maybe, I could get him to move his interest to other things. Sexy, half-naked things… but it was a long-shot. Jonathon never had sex with me after a punishment. He said it felt like he was rewarding me for bad behavior, or at the very least, saying that the behavior was okay. He didn’t want me to get the wrong idea. For a man who had been so reluctant about having a DD relationship in the first place, he sure had become strict!

“Ten more,” he announced, jarring me out of my thoughts. I cried out at his announcement but buried my face in the pillow again.

2013-09-12
+admin
Previous: Korey’s Ode to eBooks
Next: Aching to Submit by Natasha Knight