A Legacy of Dominance by Emily Tilton 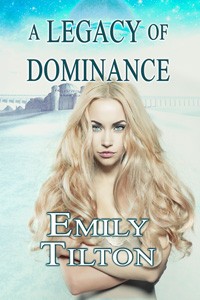 As Robert Lourcy commences the training of his new concubine—a beautiful young maiden named Beria—on a distant world in the 39th century, he shares with her stories of the most noteworthy deeds of his forebears. Over the course of many centuries the men of the Lourcy family have soundly spanked, skillfully dominated, and thoroughly claimed countless women, and one day Beria’s own story will take its place alongside a myriad of others in a legacy of dominance.

The anxious expression remained, but she said, “Why must my hands not be free?”

“Because if your hands were free, columba, you might interfere with my enjoyment of you.” To emphasize his point, he put his left hand between her thighs, forcing them open and seizing her bare, virginal pussy in his probing fingers.

Sarah gave an inarticulate cry of surprise and helpless pleasure, moving her hands fitfully against her chest, her chin, as if she had forgotten he had bound them there. Robert continued to caress her with the utmost lewdness, rubbing her anus, her labia, her clitoris, as he spoke again.

“Of course, not allowing you to touch yourself here is a very important part of that. We regard female self-pleasure without permission as a very serious interference with our enjoyment. This little cunt…” Sarah moaned as he probed almost to her maidenhead, “…and this little anus…” a whimper at the pressure of two fingers in the tender valley, upon the tiny hole, “…belong to me, now, as your pater. I will decide how I, and those to whom I loan you, use them.”

A violent shudder went through Sarah at these words. Now Robert abruptly used his right arm around her shoulders to turn her onto her back. “Legs wide,” he said. “You’re going to come again now. I want to taste your sweet little cunt, to show you what I mean about how it belongs to me.”

Her eyes were wide and her breath came in gasps as he got out of the bed and used the straps attached to its frame, clipped to her thigh cuffs, to spread her wide, her knees almost to her chest—the same position in which she had lain on Claudia’s coffee table for an hour, but without her pater to claim her.

Sarah cried out, and her wetness came quickly, almost in a gush. Robert bent down and kissed, licked, and tasted her. “Mmm,” he intoned softly, lifting his mouth from her pussy but still gazing down at where the coral inner lips, and even a tiny peeping hint of her clitoris had appeared. “Delicious, Sarah. What a lovely, delicious cunt you’ve given me for fucking.” He flicked his tongue against the little nub, and Sarah cried out.

Again Robert raised his head, and looked into her eyes. Her brow was knit with passion, and her mouth set into a moue that seemed to express helpless astonishment that he could make her feel so wanton. Her fists were clenched, and she seemed to be using the bondage of her cuffs and collar to increase the tension of her muscles pleasurably, to make herself more aware of how powerless she was to stop him from pleasuring her so degradingly.

2015-11-14
+admin
Previous: The Code of the West by Kelly Dawson
Next: Reining in Riley by Claire Britain