A Message From the King by David Sullivan 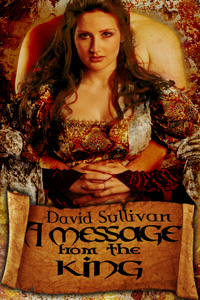 In the years since her husband’s passing, Lady Gabrielle has ruled her castle alone, and in that time she has earned the love of her people. Unfortunately for her, though, word of Gabrielle’s scandalous behavior with her squires and her utter disregard for the customs and traditions of the kingdom has reached the ear of the king and earned his ire.

When one of the king’s most loyal knights, a great bear of a man by the name of Sir Tristan, arrives at her castle he quickly witnesses her defiance firsthand. To Gabrielle’s dismay, she discovers that Tristan bears a message from the king, and that message is to be delivered with his firm hand and his belt on her bare bottom.

In spite of her fury toward Tristan after her shameful chastisement, Gabriele cannot help but be powerfully attracted to the enormous brute of a man. When she learns that the king has plans for her and for her castle, however—plans which intimately involve Sir Tristan—her pride spurs her into conflict with the dominant knight once again. Can Gabrielle bring herself to obey the will of the king and submit to the lordship of Sir Tristan, or will she spend the rest of her life with a sore bottom?

“This is the king’s message.” He worked hand over hand until her clothing was cleared of her back end; then his hand fell time and again onto her exposed skin.

“Lady, there’s no pleasure for me to deliver the message, but my duty must be done. Make it easy for both of us.” His tight grip and muscled arms overcame her efforts at freedom. His legs scissored hers to lock her in tight as his free hand gripped her waist. His powerful paw, like a bear, slammed into her sit spots, several on one side and then several to the other. The pattern repeated. She winced and moaned with each spank but was determined to show no pain.

“The king’s message is that no lady runs a manor; he should have been advised of the situation here, and you are henceforth to conduct yourself in a lady’s fashion.”

She thought he couldn’t hit her harder, but then the power seemed to double. Her vision blurred with the welling tears, and she broke her will to stay stoic. “Ow, oh, oh, stop this! You’ve no right!” She renewed her efforts at kicking and squirming as the spanking intensified, all to no avail as his legs locked her against him. She shook her head to try to dissipate the pain.

“I carry the right of the king. If you persist in resisting me and the king, he’ll order your manor returned to his kingdom.”

His words chilled her as a plunge in the cold river would. She became limp. Her manor could be lost. Of course the thought and potential had festered in her mind for years, but as more years passed, she had turned placid over the potential; now she faced it. Tears flowed from the spanking but also from the thought of losing her manor. Her screams echoed and reached her ears as the fire in her ass spread throughout her body. She prayed for God to convince him to stop, but it went on. She coughed through her tears. It was best she chose to meet with him without a witness, despite having no idea a spanking was the king’s message.

He finally stopped and hoisted her in his large hands as she would lift a baby. He planted her feet to the floor but held firmly around her hips. “Can you stand, Lady Gabrielle?”

It took effort to return stability to her legs. Her dress and under-items fell into place, but she was afraid to rub her raw ass. Finally, she nodded. He fetched her cup and water pitcher and poured for her. Their hands met as she sipped. The hands that had beat her now comforted her. Both God and the devil resided in him.

2013-08-13
+admin
Previous: Being Their Baby by Korey Mae Johnson
Next: Marketing Vs. Marketability