A Punishment Marriage by Emily Tilton 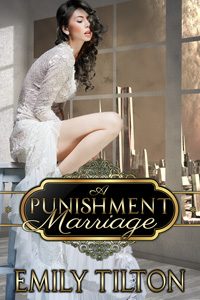 Lily James knows what she wants in a husband, and it isn’t some alpha male who will expect her to do as she is told. Unfortunately for her, on the planet Meliora matches are not made based on the whims of eighteen-year-old girls, but by a sophisticated computer program with access to data that allows it to know a woman’s true needs even when she doesn’t know them herself.

Determined to make her own match, Lily attempts to hack the computer’s database, but when her actions are discovered she is given a harsh sentence: a punishment marriage. A man will still be chosen for her, but only after a thorough, intimate examination to properly evaluate her long-hidden need to be dominated. To make matters worse for Lily, once the match is made her new husband will have full authority to take her in hand and chastise her in any way he sees fit.

Commander Eric Burton never thought he would marry again after his wife’s death, but when he is offered the chance to tame a wayward bride and earn a large stipend from the government at the same time, he can’t pass up the opportunity. Though it is immediately obvious that Lily will require firm and consistent discipline, the beautiful, feisty girl quickly claims a place in his heart. As Eric sets out to show her just how much pleasure is possible when she yields to his mastery of her body, can Lily bring herself to accept that surrendering to a man like him is no punishment?

Why would her husband have her waxed down there? How would he? On whose authority?

She watched the doctor get a plastic speculum from a drawer, and squeeze some clear lubricant on it.

“Most citizens don’t really understand what a marriage under disciplinary circumstances entails, because they’ve never had close contact with the process,” he said as he got the horrid thing ready to go inside her. “It’s very important that I make it as clear to you as possible, Lily, that your husband will stand in what we call a correctional position with regard to your life and in particular with regard to your body. Privacy will be a thing of the past for you, I’m afraid, and he will explicitly be allowed to punish you in public with your bottom bare.”

Lily refused to react to this terrible news. She knew he wanted the satisfaction of a What? or an Oh, God, but she resolved absolutely not to give it to him. She couldn’t help a little gasp, though, as the beak of the speculum came inside her.

“Try to relax, Lily,” the doctor said. “I know it’s difficult when I’m telling you about your husband’s rights, but it’s essential that I ascertain the health of your vagina and your readiness for sexual intercourse.”

She could tell that he actually meant to make it more difficult to relax, rather than less, but again she didn’t want to comply with his wishes, and so she tried as hard as she could to relax the muscles below her tummy, even if her mental state lay very far from relaxation. When she succeeded, she started to feel as if she could at least maintain some measure of control in the situation. It represented only a tiny victory, but maybe she could build on it?

“Good girl,” the doctor said, and Lily took a little satisfaction herself in hearing that he didn’t really mean it. “Do you have any questions for me about sexual intercourse? Even with the kind of comprehensive health education we have on Meliora, girls often arrive at eighteen with unanswered questions, maybe not through having been inattentive in the classroom—though I have to say I suspect you probably were inattentive, given your generally rebellious attitude—but through having been too embarrassed to ask.”

2016-08-01
+admin
Previous: Mated to the Beast by Grace Goodwin
Next: The Doctor’s Little Mate by Meredith O’Reilly