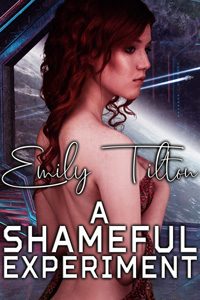 In an attempt to escape her troubles on Earth, nineteen-year-old Tilly Squires inadvertently stows away aboard a spacecraft headed for Saturn. When she accidentally damages equipment critical to the ship’s planned scientific endeavors, however, she soon finds herself bound, blushing, and completely on display for a hard, painful punishment with a strap applied to her bare bottom.

With its original objectives no longer achievable, it is decided that the mission will instead undertake a very different sort of research. To explore the effectiveness of a shared sex slave for the enhancement of morale, after a thorough, deeply humiliating medical examination, Tilly’s virgin body will be made available for the crew to use and enjoy in any way they please.

But as she is claimed over and over by more than a dozen stern, sexy astronauts, will her helpless arousal prove that she is not an entirely unwilling participant in this shameful experiment?

Publisher’s Note: A Shameful Experiment includes spankings and sexual scenes. If such material offends you, please don’t buy this book.

She bit her lip, and emitted a tiny whimper at the thought. She felt warm, down between her legs—warmer than she ever had. How? Why? Desperate to distract herself from the embarrassment of that arousal, she turned back to the commander and tried the same plea again, for lack of a better one. “I didn’t mean to break the…” Tilly almost said stupid fucking science shit but managed to stop herself, “…that science stuff!”

“Did you mean to hide from security, Crewwoman?” the commander asked in a calm voice that told Tilly immediately both that the man had made up his mind immovably and that Commander Henry Smith’s sense of justice took in a great many factors—not merely an individual act but the entire situation. “Did you know that you were in a place you shouldn’t be?”

“Did you know that this mission represents humanity’s hope for a future in the stars?” Now Tilly could hear a little emotion in the commander’s voice, and she understood suddenly that in breaking that stupid fucking science stuff she had done something really, really bad.

She wanted to deny that she had known about Freedom’s Hope and what it represented, but she also refused to lie. “Yes,” she whispered, and closed her eyes, scrunching up her face so that the tears would leak out and the stern officer would see them.

“Specialist Foster, do your duty,” said the commander, on the other side of the blackness Tilly had created, and maybe Tilly could hear a little more regret in the pilot’s tone, but that made it worse. She opened her eyes and cried out one more plea for mercy.

But right after the no she heard the whistling of the strap through the air and then the echoing noise of it and she felt the first awful sensation, the terrible sting that got worse and worse as her body understood that the whipping had begun. Another whistling… Dr. Foster must have braced himself so he could swing hard even in zero gravity, and they had bound Tilly in place so he had a perfect target… Tilly screamed at the second lash.

It hurt so much. So much. Dr. Foster whipped her hard and fast, gave her no respite, and Tilly felt like her whole backside had caught fire. He lashed her across both her naked bottom-cheeks, across her thighs, her right cheek, her left cheek, over and over. She struggled, crying out, her backside clenching and moving in the straps that bound her, but only a little, not enough even to soothe the terrible pain let alone get out of the way of Dr. Foster’s unerring strap.

Tilly tried to turn to her left, to see Dr. Foster and to beg him to stop for just a moment so that the awful pain would fade a little, but the way they had secured her to the seat only let her catch a glimpse of his tall, red-suited form as he brought his arm back and then forward with another lash right across the lowest part of her bottom, where she could feel it in her virgin pussy. Tilly screamed and bucked against the padding of the seat, and then her bottom surged out again of its own accord. She wondered if the ones behind her could see her red-haired private slit, if it made them think about the sex they couldn’t have, and the heat in her face rose as if to rival the terrible burning in her backside.

“That’s twenty,” said Dr. Foster. “Should we leave her there?”

“Oh, no,” Tilly sobbed. “Oh, please… it hurts so much…” She only wanted to slink off into some corner, some… sleeping pod, or whatever… to rub her bottom a little, soothe herself. To her dismay, the heat down there, which had vanished as Dr. Foster whipped her, returned double or triple now at the mere thought of that soothing.

“Yes,” said the commander. “Colonel Jones, please make sure the crew all take a good look at Miss Squires’ bottom.”

“Oh, please…” Tilly said. The heat seemed to become melting, now, in her pussy, and she felt a little of the wetness trickle out. The realization sent a rush of blood to her face, too. She bent her head and hoped they wouldn’t notice.

But a male voice—not one she thought she had heard before—said, “Look at her blush. I think she’s learned her lesson.” Tilly opened her eyes to see that one of the men in the green jumpsuits, with Haller on the breast, had taken a stand in front of her, and was looking down into her eyes. He had a blond beard and sky-blue eyes, and seemed about thirty. He reached out his hand to touch Tilly’s cheek, as her eyes widened in surprise and her heart started to beat very fast again, after it had just calmed down from the whipping.

2018-11-30
Chris
Previous: His Conquered Bride by Sassa Daniels
Next: Their Christmas Daddies by Shelly Douglas