A Shameful Punishment by Emily Tilton 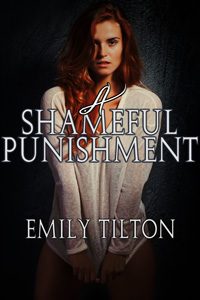 Katrina Cole swore loyalty to the Pretorian Guard. Then she betrayed them. Now she has been caught, and her punishment will be more shameful than anything she could have ever imagined.

She will be bound, naked and helpless, as she is thoroughly and painfully strapped. Then she will be used in the most humiliating ways possible, taken over and over again first by the man who trained her and then by one guardsman after another. Her begging and pleading will be ignored as one savage climax after another is wrung from her quivering body, and by the time her ordeal is complete she will be left in no doubt that she has truly been utterly and completely mastered.

Publisher’s Note: A Shameful Punishment is a stand-alone book which is the fourth entry in the Bound for Service series, which shares the same near-future setting as The Institute Series. It includes spankings, sexual scenes, intense and humiliating punishments, and strong D/s themes. If such material offends you, please don’t buy this book.

The guard knows how to punish treason.

Daria’s words, in Katrina’s mind, then, that first day: “You belong to your masters, now. If you fail in their trust, they will know how to punish you.” The frisson that had gone through Katrina’s whole body took hold of her again, over the bench deep below Manhattan.

Oh, whip me. Please, but… but not like that. Not like he did. Not like the others will, when they take me to pay the price of my treason.

Jay’s icy voice went on, though, and the burning of the mastix didn’t fall upon her bottom.

“An intelligent girl like you, though, knows that your punishment isn’t going to begin for quite a while. You know that, Katrina, don’t you? That I’m not here to punish you?”

His voice had turned warm and wistful again, and it made Katrina sob, “Yes, sir.”

“No,” Jay said more softly, moving closer to her again, standing over her upturned backside. “I’m here to understand.”

“B—” Katrina started, meaning to say again that she would tell him everything, that Halvorson had told her to tell him everything, that she didn’t know what that meant but she wanted her owner, her leo, to know it all, now that it was over and she must go and receive the terrible discipline the Pretorian Guard prepared for girls like Katrina Cole.

But the word of protest died on her lips and became a long, piercing, unformed cry of forced pleasure. Jay had seized her pussy just as roughly as he, the other, the one whose name Katrina now pushed from her mind in wrenching self-disgust, ever had. He rubbed her clit so hard… too hard… but the pain felt right… and his thumb, pressing against her anus, claiming that shameful part of her—no, reclaiming it and taking it back for himself…

She came so hard, and so long, and Jay kept going, two fingers now inside her pussy, seeking her g-spot unerringly and making the orgasms come in batches, while Katrina wordlessly screamed out her penitence, writhed on the bench, begged him to stop. He didn’t stop until she had started to weep with the excess of pleasure, with its turn to displeasure, to a feeling that she never wanted pleasure again. Katrina lay limp over the bench when he took his slippery fingers from her pussy, tears pooling on the stone floor under her face where it overhung the end of the padded surface.

“Now,” Jay said, returning to the cold, stern tone. “Start talking. But not about what you did, or what you told him. Tell me about his cock.”

“What?” Katrina couldn’t even figure out whether she’d heard him correctly, or if her memories of him and of Halvorson had somehow become intertwined and tangled into a fantasy that had risen to overtake the horrible reality of the interrogation room.

“You heard me. Does your handler have a big cock?”

A whimper came from her throat. If Jay had asked the question like a jealous lover, or better like a jealous, angry master, she might have known how to answer, how to tell him that she loved him, and had never felt anything for the enemy agent but a shameful need she hadn’t been able to control. But the way he had asked that lewd, degrading question, like a dispassionate official on a fact-gathering assignment, went against every expectation of how this scene would play out—whether those imaginings had fallen on the side of Jay showing her how much she had hurt him or on the side of out-and-out torture, the lash falling on her naked rear end until she screamed out all her confessions.

2018-10-05
Chris
Previous: Chosen for Their Use by Ivy Barrett
Next: Taming His Cowgirl by Delta James