A Star In His Hands by Lori Tyler 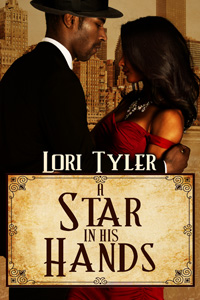 From the moment twenty-year-old jazz singer Lucinda Hastings meets Ben Webber, she knows immediately that he is something special. Aside from being tall and handsome, Ben is polite, classy, and self-assured, and he treats her like a lady. But Ben is an old-fashioned man, and when Lucinda’s behavior gets out of hand and she defies him in public, he decides enough is enough. Almost before she knows it, Lucinda ends up bent over the side of his car, in full view of anyone passing by, getting the spanking of her life.

Lucinda’s love and respect for Ben only grow deeper after he takes her in hand, and before long Ben is both her husband and her manager. He takes both roles seriously, and whenever she puts her career or her health in jeopardy, Lucinda finds herself over Ben’s knee, her bare bottom quivering as she is soundly spanked. But life as a rising star holds many temptations, and even Ben’s firm guidance cannot keep Lucinda safe from all of them. Can their love survive the strain of Lucinda’s increasing celebrity, or will fame and fortune tear them apart?

“Um… is… is there anything I can say to get out of this? Anything at all?” her voice trembled.

Ben nodded. “Sure there is, baby.”

Lucinda placed a hand over her heart and breathed. Thank God, he was giving her an out. An apology? A promise to never do anything like this again? Sign a statement that says she’ll never go into Macy’s again? Whatever it was, she’d do it.

“All you have to say is that you’re innocent. That you were arrested because of a misunderstanding. That all of this is a huge mistake. And I’ll believe you.” He flipped the hairbrush in the air and skillfully caught it at the handle. “I’ll back you up a hundred and ten percent, and we’ll fight this thing together. I’ll believe you because… you’d never lie to me.” His eyes locked with hers. “Right?”

This wasn’t an out. This was a guilt trip and she was trapped inside. She felt herself gasp for air, and then let it out in slow, broken spurts.

“Right,” she whispered. She moved her eyes around the room and caught the sight of something she had missed. There was a huge mirror embedded in the wall. She had seen enough episodes of Dragnet to know what that was. It was a two-way mirror. She could only see her reflection, but anyone on the other side could actually see into the room without her seeing them. A tear spilled out of her eye onto her cheek. “Ben, can’t we do this at home? Please?”

“I’m afraid not, honey. Mr. Greenberg has to get back to work, and I promised him we wouldn’t take up the rest of his evening. Let’s get this over with, okay?” Ben didn’t look angry. He looked sad, hurt, disappointed… and backed into a corner.

Lucinda began to cry. She backed up against the door and wrapped her arms around her body. Ben knew that she wasn’t going to cooperate. Out of all the times he had paddled her before, she had never cooperated once, and he didn’t expect it this time. He walked over to her and put his lips close to her ear. “Don’t fight me, Lucy. Let’s just get this over with, okay?”

With that, he lifted her off her feet, moving her horizontally so that she was face down under his arm. She began to sob almost hysterically. Ben carried her over to the chair and sat down, placed her over his lap, and wrapped his arm around her waist so that she couldn’t move. She faced the two way mirror and looked up, imagining the entire New York Police Force watching her from the other side. She felt Ben’s fingers in the waistband of her polyester pants as they were yanked down past her cheeks, and she clenched hard as she waited for the first blow.

The hairbrush came down on her backside with a resounding echo that reverberated off the walls of the empty room. Lucinda howled as the pain blossomed to every nerve ending in her body. Before she had time to recover, the other cheek took a blow more painful than the first. Lucinda’s body bucked and her face contorted in lines of unadulterated agony.

They were coming faster and more furious as she tried desperately to roll off Ben’s lap, but as usual, there was no budging so much as an inch. All the kicking and screaming and struggling only exhausted her until she reached a point of complete resignation. She lay limp, drained, and prostrate like a rag doll while Ben administered forty merciless blows to her bare bottom with full force. Her screaming stopped and was replaced by pitiful sobs as her tears formed a puddle on the interrogation room floor.

When Ben was through, he lifted her waistband back to her waist before he stood her up. Lucinda’s knees buckled and she gingerly slid to the floor in a heap and cried at the feet of her husband, her face in her hands.

Ben moved to the other side of the room and whispered something to Mr. Greenberg that Lucinda couldn’t hear through her sobs. The two men shook hands, and Ben handed the offending hairbrush to him. Mr. Eugene Greenberg tapped on the mirror, and the door was unlocked and he left the room.

Ben came back over to Lucinda and sat on the floor in front of her, crossing his legs in his good pants as he waited for her to calm her hysterics. When she had quieted down a bit he said, “There was one more condition to Mr. Greenberg dropping the charges against you.”

Lucinda looked up. Oh, God, what more did the man want? To cut off her hand? Maybe her firstborn? She lifted her head out of her hands and waited for the bad news.

Ben reached for the large white box on the table and placed it gently in front of her. “I had to buy the dress you tried to steal.”