A Strict Gentleman by Jaye Peaches 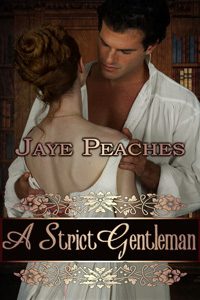 Twenty-three-year-old Kelly Regan didn’t expect much excitement when she took a job as a curator at a historic estate, but upon encountering a beautiful, mysteriously powerful mirror she suddenly finds herself transported back to the Victorian era.

Kelly is intrigued by the estate’s owner, the handsome bachelor Sir Henry Yarlswood, and in order to learn more about life in his household she impersonates another woman and obtains a position as his maid. But Henry is not a man who tolerates dishonestly from his staff, and after her deception is discovered Kelly’s bottom is bared for a painful, embarrassing spanking.

The stern punishment only increases Kelly’s desire to know more about her handsome employer, but after she is caught snooping through his personal effects she is promptly stripped naked for an even more shameful chastisement. Despite her sore bottom, however, she is deeply aroused by Henry’s firm-handed dominance, and when he claims her properly his masterful lovemaking leaves her spent and satisfied. But will their blossoming romance be enough to keep her by his side, even if it means leaving her old life behind forever?

Publisher’s Note: A Strict Gentleman includes spankings and sexual scenes. If such material offends you, please don’t buy this book.

Her eyes widened as he lifted the dripping ginger and held it aloft, presenting it to her. The root wasn’t small and it was bent toward the end forming a natural plug. Would it fit easily? She whimpered loudly, knowing it would please him to hear her resist in some small fashion.

He cast aside his robe and strolled toward the bed, holding the ginger in one hand, the cane in the other.

She gulped down air, trying not to panic or lose courage. Just as he approached, she snapped her legs together—this wasn’t an act, she really wanted a moment to prepare herself. If he didn’t look so suave and calm, she’d baulk louder and edge herself off the bed.

“Now, now,” he reprimanded. “Open up, or there will be ten strokes.”

“I don’t want it in my bottom,” she whined. God, it was glorious being this pathetic and hopelessly aroused at the same time. Why had nobody told her kink was this much fun? Well, not just fun, it was also mortifying and bordering on the perverted.

However, deep down, she trusted Henry. He applied his moral code without deviation and it didn’t include harming her, at least not permanently.

She slid her legs apart inch by inch.

He knelt beside her raised arse and prised apart her rigid cheeks. Cold water dripped down her oiled furrow. She flinched and tensed, knotting the muscles in her arse into a hardness she could sense.

“Relax yourself, young lady, or it will hurt,” he said.

She buried her face in her hands, slumped down onto the bed and focused on getting her bottom to stop quivering. It was tough. She was so excited and nervous, neither wanting the pain, but somehow expecting it, almost welcoming it.

He nudged once, twice, then the tip of the root stretched her open and pushed past her unintended resistance and filled her entrance. Henry stroked her back, soothing her while his other hand maintained its course, refusing to withdraw the root when she squeezed it.

The ginger inched into her bottom and she bleated, “Oh, it’s so big.”

He disagreed. “It’s a small size. I chose it out of kindness. Of course, if you continue to protest, I could cut a larger one.”

2017-07-09
Chris
Previous: Owned by the Wolf by Jinx Neale
Next: The Oak Street Method: Wendy by Emily Tilton