A Unique Arrangement by David Sullivan 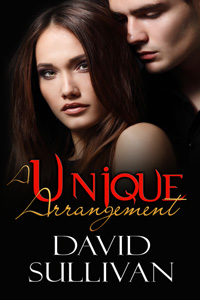 After eighteen-year-old Troy lands his first job at a local animal shelter in San Jose, California, he almost immediately develops a strong interest in his attractive co-worker Angela, and to his excitement, he finds that the interest is mutual. Before they begin dating, however, she confesses to being polyamorous and being involved with Ryan, a 40-year-old millionaire with the heart of a young man.

Troy is invited to Ryan’s mansion, where his eyes are opened to a world of open sexuality and frank discussions. While he had always thought a spanking was only for punishment, he soon discovers the value of a catharsis spanking and the wonderful pleasure of an erotic spanking. As his new world unfolds his insecurities begin to morph into confidence as well as acceptance of the widely varied lifestyles of those who live in Ryan’s home. His relationship with Angela grows at the same time, and he learns that she will frequently need his firm hand applied to her bare bottom for discipline as well as pleasure.

She couldn’t look him in the eye. He’d grown and was taking charge. “Yes, Troy. I have no excuse.”

He’d never used that terse tone before. She obeyed. As she did Ryan left, but soon returned with the spanking strap and a paddle. He set them next to Troy and settled in a recliner. A cold chill rushed through her. What if they both spanked her? She could almost feel the pain to her ass before the first strike. She stood naked waiting for directions, and bit her lip. Troy pointed down and she draped herself over his lap.

Troy paused. “Of course you’re sorry. Everyone is after the trouble happens.”

He started spanking again harder than before. She squirmed, kicked her legs and pounded her fists into the couch. Tears flowed. How could she have been so stupid?

Troy paused; Ryan spoke. “She had an accident; no one was injured. She was texting while driving.”

Peering through her tears-fogged vision, Calvin frowned and shook his head.

Troy’s hand fell on her stinging ass. She buried her face in her hands as more spanks followed. She wondered if this spanking would be as bad as the one for the bad grades. She moaned as the intensity of her spanking crept upward. Of course it’ll be worse. This was a safety issue.

Troy lectured but with the words Ryan had spoken over and over. “No texting or driving with any drugs or booze in your system.”

He smacked her ass as hard as she’d ever gotten it.