A Wife’s Correction by Emily Tilton 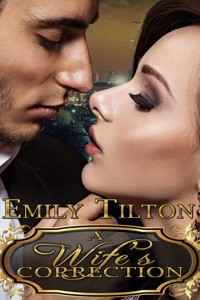 After an abrupt change in the planet Harmonia’s government, laws are put into place which alarm twenty-eight-year-old attorney Martha Allen Ames. From now on, every husband will have the right and the responsibility to correct his wife when her behavior warrants it and to teach her to submit to him completely.

Though Martha holds out hope that her own husband, Ben, will not be too strict in his application of the new laws, he proves more than ready to apply the strap and the paddle to her bare backside when she fails to obey him. But she quickly discovers that an occasional sore bottom is far from all that Ben has planned for her, and soon Martha is both blushing crimson and begging for more as her husband takes her hard and thoroughly, enjoying her in ways he never has before.

Despite her shame and defiance, Ben’s mastery of her body leaves Martha burning with passion, and his dominance increases with each passing day. But even as her desire for her husband catches fire, the couple must prepare to demonstrate Martha’s newfound obedience and submission to convince a skeptical government that she has been well and truly corrected.

She shook her head again. “No, Ben. I won’t do it. I’m not a traditional girl. I’m an attorney, and no matter what this decree says, how far it takes us back, I know you and I can negotiate something for ourselves. You’re going to have to give up on this idea of having me on my knees in front of you, letting you have your way, and on any other ideas you have about how we’re going to make love. I want to resolve things between us, and I want to be close to you again, but…”

Ben had reached for his belt buckle.

“Take off all your clothes and get over the arm of the couch, sweetheart,” he said quietly and gravely. “Sucking your husband’s cock is not optional for you. Neither is what I’m going to do some time very soon, when I fuck your bottom for the first time. I should have used your mouth and your anus a long time ago, but now we’re going to make up for lost time, so that we’re ready for the audit. It’s clear that I need to whip you first, though, to help you understand.”

He had the belt out of its loops, and he was doubling it and curling it around his fist, the buckle held in his palm. So that’s how a husband does it, Martha thought idly. That’s how he gets his belt ready to teach his wife the lesson she needs.

Then suddenly she realized what her thought meant: it meant that she had always wondered. She had always wondered what it would be like if Ben ever decided Martha needed a whipping. Even before the night in her parents’ living room, the night of the proposal, the night of the promise that had never come true, she had wanted to know what happened when a wife couldn’t obey her husband, because the thing he wanted was too shameful, even though a part of her wanted only to obey him, and to do and undergo what he wanted, the more shameful the better.

She had always wondered whether if Ben decided the time had come for her to kneel before him and learn to pleasure his hardness with her innocent, modest little mouth, and she said no even though she meant yes, he would take his belt and whip her with it, so that she had no choice at all.

2016-02-27
+admin
Previous: His Rebellious Mate by Morganna Williams
Next: Taking His Human Bride by Kelly Dawson