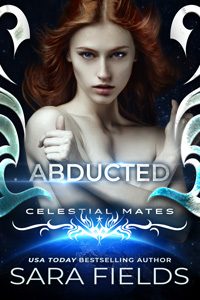 They found her. They took her. Now they will claim her.

When I left Earth behind to become a Celestial Mate, I was promised a perfect match. But four Vakarrans decided they wanted me, and Vakarrans don’t ask for what they want, they take it.

These fearsome, savagely sexy alien warriors don’t care what some computer program thinks would be best for me. They’ve claimed me as their mate, and soon they will claim my body.

I planned to resist, but after I was stripped bare and shamefully punished, they teased me until at last I pleaded for the climax I’d been so cruelly denied. When I broke, I broke completely. Now they are going to do absolutely anything they please with me, and I’m going to beg for all of it.

Publisher’s Note: Abducted is a stand-alone novel set in the world of the Vakarran Captives series. It includes spankings, sexual scenes, intense and humiliating punishments, and strong D/s themes. If such material offends you, please don’t buy this book.

He touched the back of my thigh, drifting upward till he was grazing over the cleft of my ass. He gently removed the bullet with his other hand and passed it to Talor, before he turned back to me, his jaw set in a firm line.

“I’d even bet you’d like it if we fucked you here,” he said, while he lightly tapped over top of my asshole.

My eyes grew wide with embarrassment. He wouldn’t really take me there, would he? He couldn’t. It was far too filthy a thought. So why then was my pussy throbbing even harder at his mention of it?

“Don’t you lie to me, woman,” he scolded, as he took my pussy in his left hand. He gripped it hard, his palm plying my clit, his fingers teasing at my entrance.

He slapped my pussy. Hard.

I shrieked out of shock, the sting radiating across my slick folds, but then something unexpected happened. The pain quickly molded into something more pleasurable, making my clit throb even harder against his palm.

He watched me closely.

And spanked my pussy again.

This time, I didn’t make a sound other than a quiet gasp. I knew what to expect this time and I relished the sting as it spread across my sensitive skin.

I welcomed it even.

He slapped my pussy a few more times before returning his attentions to my asshole.

I squirmed and the way Dex’s hand flittered back over my pussy made me pause. He gathered the wetness between my legs on his fingers and spread it over my bottom hole, gradually pushing harder and harder against my tight rim.

I struggled to stay still and whined as his finger breached into my back channel, the feeling foreign and slightly painful, yet strangely hypnotizing.

He pushed deeper, and I shut my eyes, focusing on the sensation of his touch in the last place I’d ever have expected it.

“Bad girls get fucked here,” he whispered, and I shivered with arousal.

It sounded so wrong, like I should be ashamed of myself for even thinking about what it would feel like. If it would turn me on, if I could come from such a filthy act.

I swallowed anxiously, envisioning his cock stuffed deep in my ass as he fingered me there and my body heated to a feverish level. I chewed my bottom lip as I tried to force back the moan that was brewing at the tip of my tongue. My clit throbbed and my pussy pulsed, wanting more, needing more.

I should be ashamed for enjoying this.

But I couldn’t bring myself to be. Instead, that moan I had been holding back finally escaped me, making me keenly aware of how much I was truly enjoying myself.

Even then, I realized my hips were beginning to move back and forth in tune with his movements, his finger working in and out of my asshole slowly, deliberately.