Aching to Submit by Natasha Knight 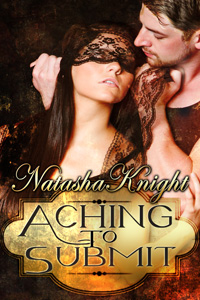 Though deeply in love with her husband Michael, for years Sophie has longed to give him not only her love, but her submission as well. In spite of her yearning to kneel at his feet, fear of rejection keeps her from sharing the truth with him. Though she would never give her body to another man, her need to submit drives her to seek out others like herself and learn more… until Michael discovers her deception and she fears her marriage may be over.

Despite the anger and sadness which tear at his heart when he learns that his wife has kept such an important secret from him, Michael is not going to give up the love of his life without a fight. It will take time, but he is more than ready to be the man she needs, the man to whom she will gladly submit. First, though, she must be firmly disciplined for her betrayal of his trust…

Standing naked before her husband, awaiting a punishment which will bring her to tears and leave her bare bottom red and sore, submission suddenly feels truly real to Sophie for the first time. As Michael asserts his dominance more and more with each passing day, Sophie begins to see him in a way she has never seen him before, and her desire for him seems to know no bounds. But is this just a second honeymoon of sorts, or will Sophie’s submission endure through the trials of everyday life?

She swallowed, dared one last glance at the paddle, and turned. It took her a moment as she bent slowly forward over the dense pillows until her chest was on the bed. She tucked her arms beneath her breasts and looked ahead, her body already tightening in preparation of what was to come.

The toe of his shoe tapped at her ankle and she spread her legs wider. Michael set the paddle down on the bed and she felt his hands on her ass just touching her, his caress soft.

“I’m scared,” she said again. “Sir,” she added, suddenly very aware of not wanting to add on a single additional stroke.

“I love you, Sophie,” he said. “I would never do anything that would really harm you. You need this punishment and our marriage needs it maybe more than either of us realize. I want you to trust me to do this. Do you trust me?” he asked.

She looked over her shoulders, meeting his eyes. She nodded. “Yes, Sir. I trust you.”

He smiled a kind, gentle smile. “Good girl,” he said. “Face forward now until I tell you you’re allowed to turn around.”

She obeyed, anticipation tightening her belly while arousal warmed her sex.

His hand came down hard on her right cheek and she jumped up, reaching back immediately to cover it. “Ow!” she exclaimed.

His hand was between her shoulder blades fast. “Stay down,” he said. “And get your hand off your ass. It’s mine now. Do it, Sophie.”

“I meant it to hurt, understand?”

“Yes, Sir.” She lay back down and tucked her arm back beneath her chest.

“Good girl,” he said. With that, he began. He used his hand first, the contact of it on her bare flesh strange, almost foreign used this way. The sound was loud, more overwhelming than the pain, but as he continued, it turned into a constant but manageable sting.

He spanked quickly, striking each buttock in turn, sometimes twice on one side before moving over to the other side. But the pain was something else entirely when he first struck with the paddle.

2013-09-15
+admin
Previous: A Husband’s Duty by Dinah McLeod
Next: The Reddington Scandal by Renee Rose