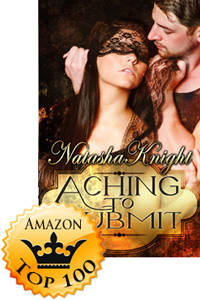 Natasha Knight has once again visited Amazon’s Top 100 in Erotica with Aching to Submit this week! This spicy story with excellent characters and a toe-curling plotline will leave you salivating for more, so we’re not surprised by it’s success. It’s reviews have been stunning so far, so Natasha’s snatching up fans left and right–maybe that’s why she’s also on Amazon’s Top 100 Erotica Authors list, as well! Are you a Natasha fan yet? Read her book and find out!

Read what others are already saying about Aching to Submit:

Aching to Submit By Natasha Knight

When I read a book by Natasha Knight there are certain things I have come to expect:
1. Hot as hell spankings and sex scenes.
2. Well Written story to capture my interest.
3. Likeable characters that I can really identify with.
4. A hot dominant man.

Aching to Submit has all that and so much more. It’s a journey that many a submissive and/or spanko will identify with, including the lumps and bumps along the road. It will speak to anyone who has either come out or still harbours a secret fantasy.

The opening scene has a very hot image of a young woman, Sophie, positioning herself over a desk, bottom bared for a punishment she desperately craves, but it’s not going to come. Its heart rending and poignant, rather like the song in Les Miserables, Only in my Mind.

We get to follow Sophie a little bit more and we can sense her loneliness. She is carrying a sadness from her childlessness, a secret guilt from her desire for submission which she feels makes her dirty, and she is incredibly isolated, being displaced from her native America to Amsterdam due to her husband’s work and his gruelling travelling schedule. All this results in Sophie’s shutting off from her husband.

We also get to see Michael, heartbroken and scared. As a divorcee, he can see the signs of a crumbling marriage and he is at a loss about how to get through to Sophie. He is also wracked wirh guilt as he feels he has caused her isolation and depression. He seems to be a tender, loving and indulgent husband.

Sophie’s need to submit becomes all pervasive to the point where she almost loses her sense of reason. She is aware of a BDSM club in Amsterdam and she stakes it out for a time before finally garnering the courage to go in. She is excited about what she sees but decides to keep away out of duty to her husband. But of course the draw is too strong and she returns. Kyan, the club leader sees her confusion and befriends her, even offering her the punishment she feels she needs, but Sophie rejects his offer, realising that Michael is the person she wishes to submit to. She is finally ready to tell him her secret.

At the same time, Michael becomes aware of Sophie’s secret trips to the club and is devastated by her rejection of him. Finally it all comes out in the open and Michael punishes Sophie for her deception. We get some beautiful insights into both Michael’s and Sophie’s thoughts as both grow into their new roles and their relationship strengthens with their newfound openness and trust. And we also get to witness the positive effect it has on their sex life!

I don’t want to add any spoilers, but suffice to say, as you’d expect from any of Natasha Knights books you’ll be gasping for breath at the eroticism of the steamy, smoking sex and spankings which are generously offered throughout.
Top marks, five out of five stars from me, for everything, sex, spankings, story and readers emotional involvement with the characters.

My favourite Natasha Knight book to date, and that is really saying something.

After Capives Desire Natasha Knight offers us a completly different book. No fantasy this time but in her hometown in The Netherlands. A housewife unsatisfied alone with a man always on the road is struggling with her submissive feelings. And just when she thought her man would not care whatever she did, he steps up and shows her just how dominant he can be, to Sophie – our heroines – delight. It’s not just hot spanking action mind you, it is so much more.
Natasha Knight hinted in her blog posts that this was a difficult book for her to write because of a number of simularities in the book and her own private life. So right from the first paragragh in the introduction the reader is captivated by blurred lines.. It feels like the reader is looking through a peephole in her life and that makes us all voyeurs in a way.

If you set aside that element from the book be warned that steam might come out of you Kindle as a result of what feels like one continious hot action scene. It leaves the reader breathless and gasping for air until the very last page. Do not throw this book away after you have read it, you might want to read it again next year. I do.

It is so nice to see that even one of the best writers in this genre improves herself again and again in every new book she writes.

I could not put this book down!
I actually started and finished it in one day, it was so good!

I loved how she so realistically captured both Michael and Sophie’s emotions, fears, desires…
It was wonderful!

I loved the imperfections in the characters. They were real, they were flawed, they were beautiful.

As an avid reader of DD and D/S books, I can say honestly that I loved every bit of this book.

I loved it, and think this is one of the best books she has written.

What a sexy, fast, don’t want to put it down, treat!

I have a select list of authors that I love and I read everything they write and now I am happy to add Natasha Knight to my list! This is a wonderful romance between a married couple that find each other again in a much improved way. The story is very well written and makes you feel you are actually along for their journey. The characters, Michael and Sophie, are so believable that you connect with them on an emotional level. And lets just say the sex scenes sizzle, whew. I believe, based on Ms. Knight’s hints, that some of this story may be real life experience for her and if so, in my opinion, she is a very lucky woman indeed. Fantastic story!! I received this book from Stormy Night Publications as an Advanced Reader Copy.