Alice and the Colonel by Jaye Peaches 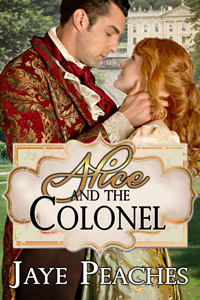 There is nothing quite like a man in uniform—at least as far as nineteen-year-old Alice Aubrey is concerned—and when Colonel Edmund Seymour’sregiment arrives in town she is ecstatic. But a bout of youthful exuberance results in her wandering through the streets unchaperoned with a junior officer, inebriated and causing a general commotion, and it isn’t long before the entire town hears of the incident.

Upon visiting Alice’s home to apologize to her family for the officer’s conduct he is informed that due to the ensuing scandal Alice now has no chance of marrying well, so he does what honor demands and asks her father’s permission to marry her himself. Agreeing that this is the only good offer Alice will ever receive, her parents inform their wayward daughter that she must accept the colonel’s hand or be disowned.

Alice wisely accepts, but only a day after the wedding her sharp-tongued defiance rears its head as she tours her new home. To her shock and horror, Edmund leads her to a private spot in the gardens, bares her bottom, and spanks her soundly until she is sobbing and repentant. Worse yet, she is made to finish the tour of the estate with her bottom sore and her cheeks blushing. In spite of her shame, his stern chastisement awakens something in her, and when he takes her long and hard that night it satisfies her more than she ever imagined possible.

As the months pass, Alice learns—often with the help of Edmund’s firm discipline—how to be a respectful, modest wife in public even while enjoying the most scandalous pleasures with her husband in the bedroom. But when Edmund grants her wish to throw a ball, will people see that the silly, frivolous girl they remember is now a lady worthy of their respect?

She couldn’t believe her ears. His idea inflamed her further. Heat rose about her face with her anger. “Spank me! You shall do no such thing. My father never took the rod to me—”

“Perhaps that is where the fault lies in your upbringing. He did good as say so to me. He knows of my intentions to discipline you and he didn’t express any grievances or objections. Now, lift up your skirts and bend over my knee.”

“No!” squawked Alice shaking her head vigorously. She looked about the walled garden, hoping the gardener would appear and thwart Edmund’s plans, but they were quite alone and invisible behind the high walls.

“Very well,” said Edmund placing his hands on his hips. “If needs must, I will force you over my lap and bare your bottom.”

Alice went to back away farther, but his sword arm was swift and strong. Taken by the upper arm, he easily dragged her down and over his lap. With both hands upon her, he imposed his will and even managed to take hold of her skirts and pull them towards her waist.

She kicked, struggled and tried desperately to heave her body upwards and away from him. Her right arm he held on to tightly and pinned it across her back while the other continued to seek out her naked flesh.

His speed surprised her. Try as she may, she couldn’t shift his heavy limb. Panic-stricken, she resorted to pleading. “Please, Edmund, please don’t do this.”

“It is too late for such petitions,” he said gruffly. “You called me pig-headed.”

“It was spoken in haste. I didn’t mean it,” she rebutted, praying her recanting might work.

“Words spoken cannot be taken back. They were in your thoughts and I am sorely disappointed in you, Mrs Seymour. You will not be the wilful, petulant nineteen-year-old, who was spoilt by her generous parents. Not with me.” He used her newly acquired title and it reinforced her position—she had sworn the previous day to be his obedient wife and now she understood its significance. Her life before had gone. Now she belonged to her husband.

He hoicked up the petticoat and shift, gathering it about her waist and a cool rush of air shot across bottom. She held out for him to change his mind. He would not go through with it. Any moment now, he would release her and admonish her in another way.

The smack, loud and forceful, reached her ears before the pain. Then she felt it. A sting, neither sharp nor dull in nature and before she could assimilate it, another landed on the other cheek. Without pausing, he switched his flat palm between each buttock in rapid succession.

Alice howled, sobbed and wriggled. His actions had humiliated her and made her feel no more than a child, which she knew to be his intention. Now she regretted everything she had said to him.

“Punishments generally do,” he confirmed. “If you lie still, and stop fighting me, it will hurt less and be over quicker.”