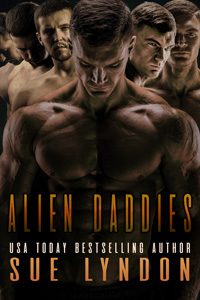 On their world, bad girls are punished.

When nineteen-year-old Makenna stowed away on a departing spacecraft, she expected a short trip to the resort planet where her friends spend their summers. What she got was a year in the custody of six strict alien daddies with the authority not only to demand her obedience and punish her as they see fit, but to use and enjoy her beautiful body in any way they please.

Torin never imagined taking a human as his mate, but the moment he catches Makenna hiding in his warship’s cargo bay he knows she is the woman he will claim, master, and share with his brothers. She will be their little girl, and they will be the daddies she has always needed.

Though she is shocked to discover that she now belongs to not one but six huge, handsome alien warriors, Makenna cannot hide her helpless arousal when her soaking wet panties are pulled down for her first bare bottom spanking. As her new daddies set about showing her all the ways a naughty little girl can be made to blush, quiver, and beg for yet another shamefully intense climax, Makenna is left feeling safer and more satisfied than she ever has before. But when someone tries to drag her back to Earth by force, will she lose the men she loves forever?

Daddy Torin had warned her not to argue but she couldn’t help it. Shame spread through her, knowing she’d been caught trying to steal a small bit of pleasure. The idea of meekly lifting her dress to receive several swats out in the wide open left her even more humiliated. Why must they be so strict?

“I mean to spank you,” Daddy Torin finally said, stalking closer. “And now you’ve earned yourself more than ten quick smacks. You should have listened to your daddy, little girl. Your bottom is going to be bright red and throbbing as hard as the heat gathering in your privates by the time I am finished with you. I warned you not to argue. I told you to obey. We are your legal guardians now and we have full authority to punish you for your transgressions, just as we did while you were our prisoner on the warship.”

She tried to back up but Daddy Aras grabbed her from behind and held her in place while the oldest of the zoshin approached. One glance into his steely gaze and regret washed through her. If she’d lifted her dress up, perhaps her spanking would already be over by now. She didn’t like the way Daddy Torin looked when displeased and she knew he could spank hard. Well, all the brothers could spank hard, but Daddy Torin seemed to know where the tenderest parts of her bottom were located.

Her stomach flipped when she recalled the time he’d spanked her privates for touching herself in the bathtub. She swallowed hard. If he decided to force her legs apart and slap her sensitive folds, she wouldn’t be able to stop him.

“Get her into position,” Daddy Torin said.

A moment later, various hands lifted up her dress as she was unceremoniously bent over one of the sofas that rested in the middle of the covered terrace. Daddy Aras remained in front of her, holding her hands down over the sofa. Maybe it was in her best interest to start obeying the zoshin, whether she agreed with their commands or not. After all, she was outnumbered six to one.

Two warm hands cupped her bottom. She didn’t have to try peering around the side of the chair to know it was Daddy Torin. A second later, his fingers danced along the seam of her pussy, probing and caressing ever so gently. To her mortification, she couldn’t restrain a moan. Nor could she keep herself from standing on her tiptoes and arching into his touch. He stroked her harder and breached her entrance, sliding two—or was it three?—thick digits into her sopping pussy. He thrust deeper and deeper.

“After your spanking, little girl, your daddies are going to take turns fucking this tight hole of yours very, very hard. You need to be taught a lesson in obedience,” Daddy Torin said.

She gasped and tried to flail herself off the chair, but the zoshin kept holding her down and Daddy Torin’s fingers continued plunging in and out of her. “Wait! You said you wouldn’t claim me until I begged for it,” she said, even though that hadn’t been Daddy Torin’s exact promise. But for a short while on the ship, she’d thought he’d meant they wouldn’t have sex with her at all unless she begged them. “Just because the judge said you could use me sexually doesn’t mean you can. Not when you promised!” Even as she protested, an erotic thrill jolted her at the prospect of each brother taking a turn at her while she was still bent over the chair, her legs spread wide and her privates on full display. Theirs for the taking.

“You know very well we only promised not to claim you as our life mate against your will, little human,” Daddy Kameel said. She recognized his voice, slightly huskier than his twin’s. “There’s a difference between fucking and claiming, as you will soon find out. We still intend to claim you as our life mate one day, but until the day comes when you beg us to spill our seed inside you, we will make use of your body in any way we desire. You are ours to do with as we please, Kenna. Now hold still. Daddy Torin is about to make it hurt.”

2018-11-24
Chris
Previous: Her Celtic Masters by Ashe Barker
Next: Blushing for Her Masters by Samantha Madisen