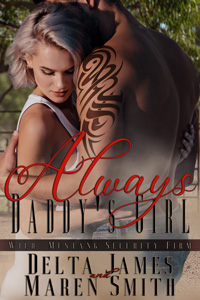 Some daddies are gentle. He’s not one of them.

Thom Lyndon has had his eye on Avery Jackson for a while, knowing full well that the Wild Mustang Security Firm’s daredevil pilot is in desperate need of a firm-handed daddy, and after one reckless stunt too many he decides it is past time to take her in hand… and over his knee.

Despite her protests, Avery soon finds herself kicking and crying as her beautiful bare bottom is very soundly spanked, but when she is made to stand naked in the corner with tears still drying on her blushing cheeks there is no hiding her body’s response to the humiliating chastisement.

When Thom claims her as thoroughly as he punished her, Avery is left in no doubt that her new daddy is in charge now, and it isn’t long before she learns the hard way that continued defiance will result in even more intimate, shameful lessons in obedience. But with the firm’s enemies closing in, will Thom and Avery’s skill and courage prove sufficient to keep their friends safe?

Publisher’s Note: Always Daddy’s Girl is a stand-alone novel which is the fourth entry in the Wild Mustang Security Firm series. It includes spankings and sexual scenes. If such material offends you, please don’t buy this book.

Over and over, he thrust into her, plundering her body as her wet heat melted and molded itself around him and the slap of his hips continued to make her feel every welt he’d left behind. He was giving her just what she needed, a good, hard ramming and she reveled in it. Her inner walls shook and quivered. It was all she could do just to wrap her head about the intensity of her own feelings—the physical, mental, and emotional things that he so easily evoked. Her breaths quickened, her mewling cries devolving into whimpers as another orgasm approached. All her muscles seized in anticipation just as he gave one last ferocious thrust and it all came crashing through her. Her shout overwhelmed his growl as her spasming pussy took the torrent of seed he released into her.

Together they rested against the wall, panting. His breaths burned her ear as he curled his face into the side of her throat. He kissed her gently and then pulled out, dribbles of hot wetness spilling down her thighs as he pushed back off her.

“Present your pussy and bottom to me,” he said, letting go of her hair.

Both weary and sated, Avery obeyed. Adjusting her hands on the wall, she arched back her hips as he pulled his pants back up. From the corner of her eyes, she watched him reach into his pocket. She saw the small jar he withdrew, but it wasn’t until he opened it, releasing a wave of pungent spice into the air that she realized this wasn’t yet over. “Wh-what is that?”

He dabbed a small amount of thick salve onto the tip of his finger. “It’s how Daddy’s going to punish your bottom hole.”

“B-but you said you weren’t going to do that until we left in the morning!” She gasped, ducking her head as she felt him rub that salve all around the tip of her dark rosebud. That minute shock was nothing compared to what she felt when he pushed his finger back inside her, thoroughly coating the delicate tissues that were already starting to tingle. Unlike the last time he’d shoved his finger inside her, this time Avery did not come.

“A present Noah gave me, just for you.”

Anal had never been very high on her agenda of fun things to do in bed. But right from the start, Thom had made it clear that her back hole was his to take whenever he desired. Because she wanted him and because everything else that he’d done had been so good thus far, Avery was resigned to the inevitability. She would give him whatever he asked for, and she would do it with little to no resistance—even, maybe even especially, that hole. After all, he’d stuck his finger in her bottom just minutes ago and she’d had one of the best orgasms of her life because of it.

But she wasn’t orgasming now. In fact, she was stinging, her back entrance and the sensitive flesh it guarded beginning to burn with a vengeance. Sucking sharp breaths through her teeth, she couldn’t keep her feet from dancing in place.

Thom rubbed the small of her back. “You’ll be fine, little girl.”

He chuckled, somewhat malevolently she thought. “You will. You will also learn to mind me, and when you don’t, I will happily use all the ginger I need in order to convince you to think twice before disobeying.”