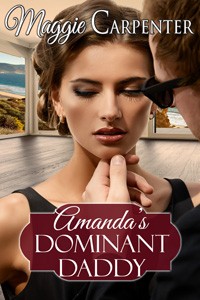 Beautiful, ambitious studio executive Amanda Anderson is used to getting her way in Hollywood, even if that means occasionally using her fiery temper to manipulate those around her. What she is not used to, on the other hand, is being asked out for coffee by a man as devastatingly handsome as up-and-coming actor Braxton Carter.

In spite of her attraction to him, Amanda is doubtful of his intentions and she blows him off. But after an inept valet wrecks her car and Braxton offers her a ride home, she finds herself inviting him in and cooking dinner for him. A passionate kiss leaves her yearning for more, but what truly sets her blood racing is the quiet, confident dominance which he makes no effort to hide.

Braxton soon proves more than ready to take control of Amanda in a way no one else ever has, and when she throws an unexpected tantrum, he warns her in no uncertain terms that in the future he will not hesitate to bare her bottom and spank her soundly if he feels it necessary. She soon puts him to the test and ends up over his lap for a painful chastisement. Being punished like a spoiled child shocks her but also arouses her more than anything she can remember, and when Braxton decides that what Amanda needs is a firm daddy she cannot resist the offer.

Spending time as Braxton’s little girl awakens a part of Amanda that she has hidden away for years, and she delights in his attention as he bathes her, dresses her in cute clothes, and holds her in his arms. Even the spankings she gets when she is naughty remind her that her daddy loves her. Amanda has never been happier or more fulfilled, but after a misunderstanding convinces her that Braxton is using her to advance his career, she is devastated and refuses to listen to his explanation. Can he find a way to win back his little girl’s love and trust?

“Are you ready for your punishment for stealing?” he asked.

“Yes, daddy, I guess so,” she said nervously.

She watched him reach into his pocket, and as he withdrew a glossy gold butt plug, she let out a shocked gasp.

“This is going up your bottom, and you’ll have to wear it until I decide you’ve learned your lesson.”

“I most certainly do mean it. Do you think you’ll want to steal again?”

“Turn around, place your hands on the end of the counter, and bend over.”

“If you don’t, I’ll spank you with that bath brush, and then put it inside you.”

Reaching into his pocket, Braxton retrieved a small plastic bottle of lube, and after placing a dollop on the end of his finger, he pulled her cheek aside and touched it to her hidden back hole. She let out a low moan but didn’t move, and placing the butt plug against her, he carefully pushed it forward.

“Be good for daddy,” he purred. “You know you deserve to be punished.”

2016-01-23
+admin
Previous: Thoroughly Trained by Emily Tilton
Next: A Gift for the King by Sara Fields