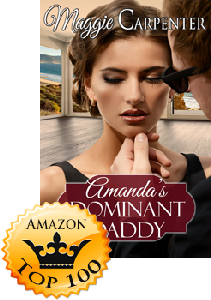 This is my second read by Maggie Carpenter and I was not disappointed. 🙂 Another great story that was read in one sitting.

As the title say’s, this is about Amanda Anderson. A business woman in the entertainment industry of Hollywood. She’s a tough no nonsense lady, not opposed to throwing the odd tantrum to get her way or having those she meets, caving in for the peace under her manipulation. 🙂

While attending a gym, she notices Braxton Carter. A younger, handsome and talented actor. He too has noticed her as each ponders what it would be like to be with the other. Braxton makes the first move inviting Amanda for a coffee, that quickly becomes a bit of disaster! 🙂

They do eventually meet later that day, where she apologizes and is soon making them both dinner after an accident with her car. They talk and after a kiss, Amanda knows she wants more. Needless to say, she soon learns it does not pay to have a tantrum around or with Braxton. 🙂

There is the misunderstanding that has her in tears and wishing she’d never met him. But with the ‘lovely’ Jeremy; her amazing assistant, they get it all sorted with some clever trickery. I loved this new book of Maggie’s, to read and was often chuckling away at the banter between the characters. Even close to tears with Amanda, but glad Jeremy came to the rescue. 🙂

It’s a great story and can’t wait to read more of Maggie Carpenter’s books. Thank you for a fun, quick read; for me. 🙂

★★★★★ Anonymous “Romantic and Sizzling Hot”  on January 25, 2016
Tough and independent show biz executive Amanda, has seen a hot young actor, Braxton, watching her at the gym. She’s totally attracted to him, but so are all the girls, and they are young and sexy and she can’t imagine why a guy like Braxton would have any interest in her. When he runs into her at the juice bar he talks her into at least having a cup of coffee with him, but when she meets up with him in the parking lot she has a sudden panic attack, and thinks any chance of relationship is impossible, so why waste time and have coffee with him? She blows him off, and immediately regrets it. Later that night she runs into him in a restaurant and after her car is involved in an accident, he steps up and takes control of the situation, eventually driving her home. She ends up inviting him in for dinner, and he kisses her. The sparks fly. She lives in a big home in Beverly Hills, and has been hearing scary noises in her house late at night, so the next day she invites him over to see if he has any ideas about what it could be. The book had gripped me up to this point, but this is where things really start to take off. The love and attraction between these two is awesome, and the way he handles her…it’s just perfect. The scenes where he takes control as her daddy are super sweet but also sexy. This book gets a huge thumbs-up five star from me.

★★★★★ CF @ Amazon.com “Sexy With a Twist” on January 26, 2016
As a verifiable Maggie Carpenter fan, I was thrilled to see her delve into the age play genre. I watched the trailer first (they always turn me on), then watched it again. So captivating! I bought the book. I started to read it at lunch and couldn’t put it down! This is a compelling love story between two unlikely candidates. I identified with Amanda’s strong personality, which made her successful in a man’s world, but I also totally understood her personal doubts about finding everlasting love. She’s actually just as vulnerable and afraid as the rest of us! Once Braxton, a handsome actor, kisses her, she can’t can’t shake him. When he threatens to put her over his knee, she can’t decide if she wants it to happen or if she should make it not happen! Who can’t relate to that?! These characters are alive, and their interactions feel so real. The conflict that arises and fate that helps fix things between them makes for a very satisfying conclusion. I didn’t want this book to end! Through all of this, there’s panty-melting sex and age play that gives this book that Maggie Carpenter magic I crave! Great book! Highly recommended.

★★★★★ SH @ Amazon.com “Great book!” on January 27, 2016
I really enjoyed this book! The romantic journey between Amanda and Braxton had some bumps in the road but what a wonderful journey it was. Amanda, a corporate executive and strong woman, struggled with her feelings and I could feel her angst but when she finally lets Braxton in their connection was fantastic. Braxton knew he wanted Amanda and was patient but assertive enough to break down her walls. Jeremy was a joy and brought some sweet humor to the story! I received this book from Stormy Night Publications as an Advanced Reader Copy.

★★★★★ Kaila @ Amazon.com “enjoyable read” on January 26, 2016
yum yum yum.. i enjoyed this.. it ewas sweet.. sexy.. amazing.. and oh so tasty for a book. i really enjoyed the characters and their chemistry. very good story and im glad i got to review it