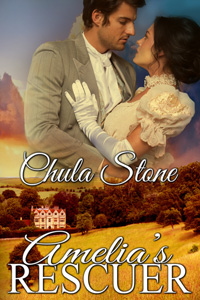 Though Hugh Claremont’s rakish wit and skill on the dance floor enliven an otherwise dull social event for Amelia Stockdale—during which she is yet again completely ignored by the fiancé foisted upon her by her older brother—she is shocked to find him climbing through her bedroom window later that evening with plans to seduce her. Amelia rejects Hugh’s advances, but his presence is nonetheless discovered and the ensuing scandal brings an end to her engagement and provides her brother with an excuse to disown her and cast her out.

From the moment he sets eyes upon her, Roland Claremont knows not only that he must make amends for his brother’s actions, but that he must have Amelia for his own. Not as a conquest for a pleasurable evening, but as his wife. He soon discovers, however, that Amelia is capable of stubbornness almost beyond his imagination. When she refuses even the most basic charity and instead insists on staying at a disreputable and dangerous boarding house, his patience reaches an end and he takes her over his knee for a sound spanking.

While scandalized by his chastisement, Amelia is nevertheless drawn to Roland. The tall, broad-shouldered former military man combines a genuine concern for her needs and opinions with a willingness to deal firmly with unreasonable stubbornness and willful defiance. When Roland proposes marriage, though, Amelia fears that he has done so only out of a sense of duty. Can she put aside her pride, accept what Roland has offered, and take her place at his side?

Publisher’s Note: Amelia’s Rescuer contains sexual scenes and spankings, including domestic discipline in a historical setting. If such material offends you, please don’t buy this book.

He seated himself on the blanket chest that stood at the foot of their old-fashioned four-poster bed. The dark curtains had been drawn to keep out the autumn chill, but the firelight cast a cheery glow that contrasted with his grim expression. He held out a hand to her, but once she had taken it, he merely drew her in to stand between his knees then dropped her hand again. “You will now disrobe.”

It was then that the full impact of her immediate situation hit her. She was expected to stand naked in front of him while he sat there, fully clothed and in control. As her chagrin settled like a knot in her stomach, a strange and confusing thrill of heat suffused her. He was in command in a way that made her feel very small and yet very secure. His strength was sufficient to direct her; it would also be enough to protect her from all the loneliness and despair she had felt in her life. While at this moment, the dread of what was to come overwhelmed her, a strange calm sense of the rightness of what he was about to do suffused her heart.

She pulled her gown up over her head, thankful that this year’s styles made it possible for her to undress without the help of a maid as had been needed in her mother’s day. In another moment, her shift joined her gown on the floor and she was completely exposed to his gaze.

“You are mine,” he declared softly. “You will listen to what I tell you. You will obey me because what I command is always intended for your good. Do you believe that?”

She looked at the floor to answer, “Yes, I do.”

Though she had not noticed it before, he must have laid the strap on the chest because it suddenly appeared in his hand. “I am going to use this strap on your backside. It will burn and sting to remind you of how your disobedience felt to me. Bend over.” He indicated his left knee and she draped herself awkwardly over it.

After adjusting her forward so that her backside was higher in the air, he rubbed the strap all over her bare skin for several minutes, making her feel even more vulnerable. She could almost feel his eyes on her bottom as the cool leather of the strap made its way back and forth over the crest of her nether cheeks and down her legs. He slid the tip of the strap between her thighs to indicate to her that she should spread them further apart as he said, “Open for me. You are mine to see. Your beauty reminds me of why I must be so diligent as I look after you.”

Again, the thrill of his voice contrasted exquisitely with the helplessness she felt. How could he produce such conflicting emotions in her heart? Clarity came a moment later in the form of a sharp swat as the strap landed. The strap on her bare skin was a hundred times more painful than it had been over her skirts. The sting was immediate, followed by a heat that grew more intense with every stroke. She was soon wriggling, trying to avoid the strap’s bite, but wherever she moved it followed her, as tenacious as it was inevitable.