An Indecent Voyage by Emily Tilton 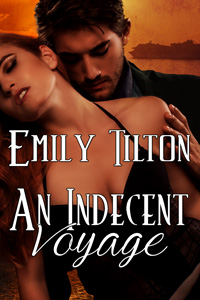 Eighteen-year-old Cara is terribly nervous about being sent to the pleasure-yacht of Lord Andrew March, one of the most powerful men in the post-collapse world of 2243. Lord Andrew will expect obedience as she is trained in all the ways to please a man, and failure to do exactly as she is told will earn her swift punishment in the form of a painful bare-bottom spanking.

Serving Lord Andrew is embarrassing enough, but when Cara is introduced to Ben Weathers, one of his guards, she finds herself truly blushing crimson. Though it fills her with shame, she can’t help aching with desire at the thought of Ben dominating her completely and enjoying her body in any way he pleases.

From the moment he meets Cara, all Ben can think about is how lovely she would feel in his arms. But Cara belongs to Lord Andrew, and Ben isn’t sure whether he can ever truly claim her as his own. When at last he has the chance to make her his—and perhaps save what remains of civilization at the same time—will he seize the opportunity even if it means risking their lives?

Andrew lifted his hand. “You have been purchased for my pleasure, and for that of the others on whom I shall bestow your favors. Tonight you will begin to learn about what I enjoy doing with girls like you. As we’ve already discussed, that most assuredly includes giving you the discipline you need.”

When Lord Andrew gave a hand-spanking, he always did it with an eye toward making sure that this most intimate form of discipline would feel like discipline to the girl undergoing correction. It seemed to him much too easy to make a hand-spanking something that, even if the girl didn’t look forward to it, nevertheless did not curb her behavior as she meditated on the possible consequences of her actions. He supposed that some men who enjoyed their bit of dominance in the bedroom might just give a few slaps, but although Andrew loved his girls to a one, he believed very strongly that especially in the terribly unsafe world the human race now inhabited, and above all on this little floating kingdom he had founded to trade in the necessary and the pleasurable, they must learn to obey him and the others he placed in authority over them.

Lord Andrew, that is, always spanked very hard and very quickly, and with the intention of making a girl cry out from the beginning as she writhed over his thigh, her bottom turning pink, then very red almost immediately. He made no exception for Cara; doubtless startled by the force of the very first spank, she began to cry out the moment the spanking began.

Andrew counted his spanks carefully, though he always attempted to give the girl currently under discipline the impression that he did not, and that the spanking would go on forever if it had to. By contrast, when he caned a girl (hand-spankings and canings were all Andrew gave, leaving paddles and straps to Freda’s team) he did it in a very measured way, each stroke of the cane being a much more fearsome thing.

He nearly always gave a hundred spanks, but he could tell from Cara’s screams of agony and her sobs of shame, as well as from the desperate way she struggled, that seventy-five would be sufficient for this first time. He covered the whole of her little bottom with each spank, so he didn’t vary the place where his hand landed very much at all; that contributed to the completeness of the slightly shorter spanking.

2015-09-19
+admin
Previous: The Sheriff’s Little Girl by Alex Reynolds
Next: Protected and Punished by Shelly Douglas