An Old-Fashioned Life by Jessica-Rose Heath 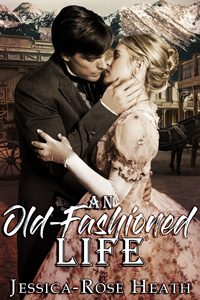 When she regains consciousness after being struck by a vehicle, Elicia Warren is shocked to discover that she has awakened in a field outside a small western town over a century in the past. Her sharp tongue quickly earns her a stern scolding from Jack Phillips, the handsome local man who stumbled upon her, and the fact that discipline is enforced very differently in this older era is brought home to Elicia more clearly as she witnesses a young woman being soundly spanked.

As she sets about learning to ride a horse with Jack’s help, Elicia cannot help falling for her strict yet patient instructor, but she is unsure what to expect when circumstances catapult them into a hastily agreed upon marriage. After she disregards her new husband’s warnings about riding alone, however, Elicia soon learns the hard way that Jack will not hesitate to take her over his knee for a lesson in obedience which will be taught with a hairbrush applied to her bare bottom.

Though Jack’s firm-handed chastisement leaves Elicia’s cheeks blushing and her backside burning, her desire for him grows stronger with every passing day, as does her appreciation for an old-fashioned life. But when she finally decides to tell him her story, will he believe her?

Publisher’s Note: An Old-Fashioned Life includes spankings and sexual scenes. If such material offends you, please don’t buy this book.

She could hear the disbelief in his voice. “Of course it hurts, woman! It’s meant to. I am punishing you. Lord, I told you not to go out riding without me. Right back when you asked me to help you with riding, I warned you that there would be consequences for disobedience, and I wasn’t your husband then. Your rear end is going to smart by the time I’ve finished.”

With that his hand smacked down hard again on her right cheek and back onto the left. The shrill yelps they produced merged with the speed of his hand. Smack! Smack! Smack! Smack! Smack! Smack! Elicia couldn’t believe how much Jack’s hand hurt. The soft, delicate skin of her bottom turned to one vast stinging heat so quickly that she simply couldn’t keep still. She wriggled and began kicking her legs in a vain attempt to ease the smarting. With a shock she recognized that reaction from her old e-books.

Jack paused for a moment and she breathed a sigh of relief, thinking the spanking was over. It wasn’t. Jack simply began to scold her. “It’s not just the disobedience, Mrs. Phillips, or the disrespect that shows. Oh, yes, I know Mr. Carrick tried to warn you. There is also the danger you put yourself in. Starlight is placid enough but suppose a dog or a small boy or something had spooked her. You are not experienced enough…” Jack suddenly stopped, realizing how odd it was to say that. To cover his confusion, he began spanking again: good solid smacks but just to her right cheek. Smack! Smack! Smack! Smack! Elicia’s yelps turned to high-pitched squeals as the burning sting grew exponentially.

“Jack, no, please…” but she was ignored as his hand just spanked that one cheek over and over again while her legs kicked and her squeals became deafening. Abruptly his hand switched to spanking her left. The smacks rained down ruthlessly and Elicia’s free hand at last shot round to protect her bottom. She had tried to be a good wife and take her punishment but her bottom was on fire. Jack was unfazed. He simply grabbed her hand and held it firmly against her back, barely interrupting the rhythm of the spanking.

When he’d turned her left cheek into the same ferociously angry red of the right, he paused just for a second and then began spanking his wife’s bottom randomly. Elicia’s squeals, squeaks, and yelps turned to tears as suddenly the spanking became too much. “I’m sorry! I’m sorry. I’ll never ride on my own again. Not until you say I can. I promise.”

“Good. I’m relieved to hear it. You’re too stubborn for your own good. Now you have six with the hairbrush to come. This whole spanking should have been with the hairbrush. I have no idea why I am being so lenient. However, my generous six is what you’ll get. Now you may count them as I spank if you wish.”

Elicia tensed. She’d seen the hairbrush in action on Claudia’s bottom. “Please,” she wailed, “not too hard. I’m really sorry.”

Smack! The hairbrush had cracked down on the right cheek of Elicia’s bottom. Her head shot up and she screeched at the shock of how much more it stung. “Jack! It hurts!”

“Falling from your horse could be a lot worse.” Smack! Her husband brought the back of the brush down smartly on the fiery red of her left cheek.

There was no reply but just another sharp smack as the brush spanked her right cheek again. Elicia’s howl was so shrill Jack felt his ears ring. Smack! Smack! Smack! Elicia wailed at each smack, her bottom already sore from the spanking and now made sharply sorer by the hairbrush. As soon as her spanking ended she burst into tears. Jack helped her to rise and disentangled her drawers from around her ankles. He then took her in his arms and she cuddled into him, wanting his comfort.