Assigned a Guardian by Emily Tilton 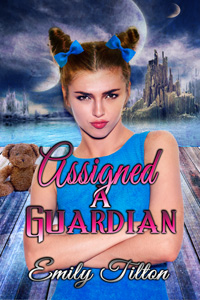 When twenty-five-year-old Kayla Lourcy boards a spaceship with her late father’s colleague, Patrick McDowell, she is glad to leave Earth and its political squabbles far behind. But when she awakens from cryo-sleep on the planet Draco, she is shocked to learn that the planet has undergone major changes. The government in power on Draco has adopted laws that require women to live under the care of either a husband or a guardian, and since she is not married, she will be assigned a guardian.

Kayla is not the type of woman to be easily controlled, and she jumps at the chance to organize a rebellion, but she is immediately thwarted and then firmly chastised. Afterwards, Patrick informs her that he will be stepping in to act as her guardian, and he will be employing a unique form of discipline Draco reserves for the most stubborn of women. Kayla will be treated like a naughty little girl, and any further unruly behavior will result in punishments far more humiliating than just a spanking.

Not truly believing that Patrick will implement his plan, Kayla defies him, and to her horror he bares her bottom, spanks her soundly, and then puts her in a diaper. But soon enough, when she’s seated at Patrick’s feet, coloring, with her new stuffed bear nearby, her thoughts about her place on Draco begin to change. As she grows closer to Patrick, will she be able to make the best of her situation and accept her guardian’s love and care?

Then, without further ado, Lydia was coaxing Kayla over onto her belly. The hospital gown, of course, instantly fell open, so that the doctor wouldn’t even need to bare her backside. Kayla tried to take that as a small victory, and failed miserably.

Kayla struggled a very little bit, but the cryo-weakness was real, and though Lydia did have to hold her down gently, because Kayla kept trying feebly to raise herself up and protest, the nurse had her on her belly and tugged at her hips to get her to raise them slightly, which seemed to make it much, much more humiliating—just as having Sandra tell her to push out her bottom, three days before on the Jupiter, had been the most shameful part of the whole thing.

Then the doctor put his arm around her waist and started to smack her bottom with his open hand. “Kayla,” he said, “listen to me.”

“Ow!” He spanked hard and quick, five times—ten. Having his masculine arm around her like that seemed to change the character of the whole thing in a way Kayla couldn’t define. She forced back the thought that Lydia had awakened in her—about how social definition could be helpful. How could this be helpful?

Did everyone know about that? Of course everyone must. Kayla felt her face grow hot.

He held her tight around the waist, but he didn’t spank her again. “Here on Draco, we have to do what we’re supposed to do, or we’re not going to make it. The time I’ve just had to spend disciplining you is time I could have been helping another patient. Do you understand what I’m saying?”

What the hell was this emotion Kayla was feeling? Remorse? She bit her upper lip and shoved it down, but when she said, “Yes,” she did mean it, a little bit.

“Are you going to get your feet in the stirrups now?”

If Kayla thought that the spanking had been humiliating, the exam was ten times more so. Once she had her feet in the stirrups, the doctor snapped on rubber gloves. Then he sat on his wheeled stool, between her legs, and brusquely lifted up the front of the hospital gown to reveal Kayla’s pussy. He looked at her down there and said matter-of-factly, though not without kindness, “Alright, Kayla, part of this exam is to inform you of administration policies regarding sex, and how they apply to you in light of what I find in my examination. So I’m going to start by conducting a visual and tactile examination of your vagina and your anus.” As he spoke, he spread lubricant on his gloved fingers.

2014-12-12
+admin
Previous: The Doctor’s Wife by Casey McKay
Next: Claiming Their Mate by Morganna Williams