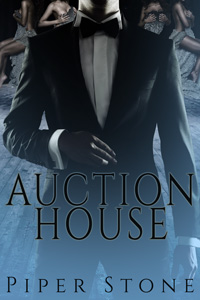 I was meant to be auctioned. He took me for himself instead.

When I went undercover to investigate a series of murders with links to Steele Franklin’s auction house operation, I expected to be sold for the humiliating use of one of his fellow billionaires.

But he wanted me for himself.

No contract. No agreed upon terms. No say in the matter at all except whether to surrender to his shameful demands without a fight or make him strip me bare and spank me into submission first.

I chose the second option, but as one devastating climax after another is forced from my naked, quivering body, what scares me isn’t the thought of him keeping me locked up in a cage forever.

It’s knowing he won’t need to.

“Your skin is the perfect shade of crimson,” he whispered then thrust his fingers past my swollen folds, flexing them open and taking his time pleasuring me. “And you’re so wet. You are enjoying this. Aren’t you, Georgia?”

What the fuck did the monster want me to say? My body was shaking like a leaf, but the bastard was right. I was enjoying this. The realization was sickening, forcing tears to form in my eyes.

He kicked my legs open even wider, every sound he made deep and guttural.

The bastard was making me crazy.

“I need an answer,” he commanded.

“There is more where this came from as long as you remain very obedient. Do you think you can do that for me?”

Goddamn it, the man continued to hum the same freaking song. As he continued the spanking, I was pushed into the place in my mind I’d trained in order to tolerate the pain.

He alternated between issuing brutal smacks then driving his fingers as deep inside as possible. I was pushed to my limits of acceptance, doing everything I could to retain what could prove to be a resolve I couldn’t keep. Everything about the man was powerful, overwhelming in a way no one could have predicted. After a few additional cracks of his hand, his loosened his hold, crowding his body between my legs.

“I’ve always prided myself in keeping away from the merchandise, a deal I made with myself after creating my world. However, I find it impossible to keep that promise. I’m going to fuck you, Georgia. While I believe you will enjoy the experience just like you did before, at this point stripping away some of the thick layers you have surrounding you is my sole intent.”

My God. This was clinical to him, as if he was doing me a favor. The man was truly one sick fuck. While he continued humming, the sound had changed, the song I’d learned in record time becoming… strange. I couldn’t put my finger on why, but when he sang a verse, I was shocked how much he’d changed the words.

He’d made them sound dirty and disgusting, but beautiful in his twisted format. I was pulled into whatever world he’d created for himself, remaining splayed out over the piano even though he wasn’t holding me down.

The only thing able to rip me out of the horrific vacuum was the sound of his zipper being pulled. He was making good on his promise. I finally reared up from the piano, no longer paralyzed by fear.

“That’s not being good, Georgia.”

Goddamn it. If he didn’t stop saying my name, I wasn’t certain I could keep from lashing out. “You’re not going to fuck me.”

“Oh, yes, I am. I thoroughly enjoyed the last time.” He wasted no time, thrusting the entire length of his cock inside my tight channel.

“Oh. Oh!” My scream of pleasure was involuntary but seemed to please him. He laughed as he dug one hand into my hip, pulling out then driving into me again.

Every sound he made was savage, predatory as hell. I continued to be thrown, the vibrations sweeping through my body something I would never have expected. I was unable to catch my breath, fighting the extreme pleasure even though every cell was seared from his touch.

Steele slowed momentarily, grinding into me as he lowered his torso until I was able to feel his hot breath cascading across my neck and back. “You feel incredible. I’m going to enjoy this more than I anticipated.”

2022-02-20
Chris
Previous: Shared by the Gentlemen: A Victorian Romance by Aurie Jameson
Next: Primal Claim: A Rough Alpha Romance by Trent Evans and Victoria Johnson