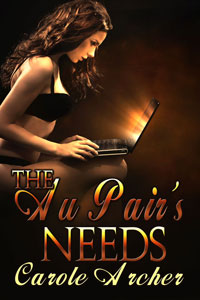 After a series of bad experiences in her native England, twenty-two-year-old Emily Pearson had decided that it was time to give up on her dream of finding a man to spank her properly. In order to commit herself completely to leaving her old life behind and starting fresh, she takes a job as an au pair in the United States.

Unfortunately for Emily, she just can’t leave her needs behind. She is immediately attracted to her new employer, a handsome single dad in his late thirties named Daniel. A single slap on her bottom from him, although seemingly an isolated incident, rekindles within her a passionate desire to be spanked and disciplined by a strong, firm-handed man.

Believing that she cannot get what she needs from Daniel, she instead looks for satisfaction on the internet, until finally she has the house to herself one day and she works up the courage to invite a man to come over and spank her… on Daniel’s bed. When Daniel comes home early and catches her in the act, Emily finally learns what a long, hard, bare bottom spanking is really like, and she also learns that a naughty young lady’s bottom can be disciplined in other ways as well.

As her fantasies deepened, she went upstairs, lay down on Daniel’s bed, and masturbated with the handle of her hairbrush. She wished she could talk to Daniel about her fantasies, but it would be embarrassing if he didn’t share her desires and she was scared she might lose her job if she told him what she wanted. As she played with herself, flicking her clit with her finger as she pumped the hairbrush handle in and out of her soaking wet pussy, she became overwhelmed by the need for a spanking, and she just couldn’t wait any longer or worry any more about whether or not Daniel would be interested.

She went online and on the spur of the moment she arranged for someone she’d been corresponding with to come over and spank her. She decided they would use Daniel’s room as she could then fantasise that Daniel was the one spanking her. She knew she would feel terribly naughty doing it, but she hoped that would only make the experience better. Although she knew meeting strangers from the internet was wrong and she was abusing Daniel’s hospitality, she was desperate to be spanked.

Wayne, the man she had corresponded with online, arrived in record time and Emily immediately led him up to Daniel’s bedroom before she could change her mind. Wayne was delighted as she pushed him onto the bed, took down her jeans and lay across his lap. “I’ve been a very naughty girl Sir. Please spank my bottom.”

Wayne grinned and started to spank her slowly. Emily closed her eyes and tried to imagine Daniel punishing her, but Wayne kept talking and spoiling her fantasy. She wished he would just shut up and spank her. She was sure that Daniel wouldn’t be so immature and would scold her as he spanked her bottom firmly. She started to squirm as she imagined this and for a moment she almost believed Daniel was with her.