Balancing the Baby by Stardawn Cabot 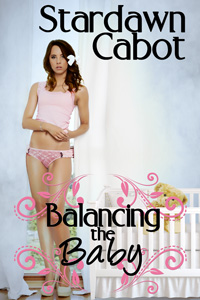 Although Sarah Anderson loves being a new mother, the chaotic, tiring routines of daily life have led her husband Wes to let the domestic discipline aspects of their relationship fall by the wayside. When Sarah stops taking care of herself properly and starts to grow more and more disobedient, he decides not only that it’s been far too long since he took his wife over his knee for a good, hard, bare-bottom spanking, but that he needs to take charge in the bedroom as well.

Wes’s dominance quickly rekindles the passion in their relationship, but he wants to take things further. Sarah remains constantly stressed out, and as far as Wes is concerned, it is time for her to submit to him more completely. He is more than ready to care for her, guide her, and correct her like a firm but loving daddy, but is she ready to be his good little girl?

Wes took the brush from her. He laid it on the table behind him before taking her by the wrist and encouraging her over his lap. He then began massaging her backside with his hand as he started to lecture again.

“I want to be clear why I’m spanking you, Sarah. It’s not just about the dress. Yes, you spent money we don’t have, which means we’ll have to cut it out from our budget elsewhere, but it’s also about trying to hide it from me. You know how important honesty is to me.”

The words made Sarah squirm, and as she stared at the carpet, Sarah was anything but comfortable. The worst part was the waiting. “I’m sorry,” she managed as Wes paused. She was trying to listen, but the position was making it difficult to concentrate.

“You are? I’m not sure about that,” Wes scolded, and as he stopped massaging and started peppering his lecture with swats, she grunted and started to squirm. “I’m thinking you will be a lot sorrier when we are done, though,” Wes continued, bringing his hand up and down several times, making his points as he pinkened her backside with the first wave of spanks.

When he finished the initial spanking, Sarah’s body tensed as she felt his hand leave her backside and reach for the brush. She then felt the cool wood from the brush being gently rubbed over her cheeks. Wes continued to lecture her, but she wasn’t paying much attention to what he was saying. Her attention was too focused on the hairbrush.

Suddenly the hairbrush was raised high up in the air before coming down again with a loud crack. A second later Sarah felt it as she let out a cry from the sudden high-pitched pain. She began to struggle, desperate to get her bottom away from the hairbrush. Wes however, was undaunted. He was focused, and as the hairbrush fell over and over again, Sarah found herself responding to each spank with an “ooh,” “ow,” or “oh.”

Several more loud and painful swats followed and it wasn’t long before Sarah’s eyes filled with tears and she began to plead with him. She promised to be good. She promised to be more frugal. She even promised to never hide anything she ever bought again. Above all though, she told him she’d learned her lesson and that she would never buy anything again without asking him first.

After Sarah repeated her promises a few times, Wes again paused. He set the brush down and listened to her cries while he massaged her backside with his hand. Wes let Sarah settle for a minute or two, before raising his hand and delivering several more quick swats to her rear.

Sarah’s crying immediately renewed, as did her promises. Her bottom was scarlet, but Wes continued until her pleas simmered down and all she could manage was one long, incomprehensible blubber.

Wes let her lie across his lap for a few minutes until her sobs had calmed before he finally encouraged her to get up. He then drew her onto his lap again. She was still blubbering, and her backside throbbing, but it felt good to be in his arms. She was sitting, or rather half lying in his lap as he merely drew her in closer and rocked her as if she were a small child. Sarah let him cuddle and coddle her until her sobs subsided into sniffles and the occasional hiccup.

2015-06-06
+admin
Previous: Rules of the Pack by Adaline Raine
Next: Shared and Examined by Bella Jackson