Bared and Tamed by Kallista Dane 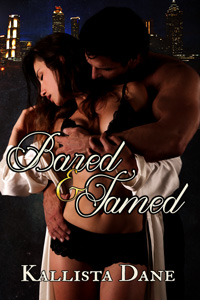 When she is unfairly blamed for the loss of a key contract, Rylie Duncan’s hot temper—along with a few too many drinks and a handy cellphone—may destroy her entire career. The inebriated messages sent to her bosses cost Rylie her job, but it is the foul-mouthed voicemail left for Neill Sullivan, CEO of her company’s biggest rival, which turns out to be her undoing.

In the years since he lost his wife, Neill devoted his energy to his work. Women were a distraction he did not need… until Rylie and her fiery temper awoke desires he had not felt in a long time. Her slanderous voicemail presents the opportunity to satisfy both his own needs and hers as well—needs she doesn’t yet know she has.

Ordered to appear in Neill’s office or risk the voicemail becoming public, Rylie obeys but is totally unprepared for what follows. Before the evening is over she is stripped naked and bent over his desk for a paddling and then, to her dismay, she cannot help but beg for Neill to take her right there in his office with her cheeks blushing and her bottom still hot and sore.

Neill’s plans for Rylie don’t end that evening, though, and for the next six months she will work two jobs. During the day she will be a well-paid executive at Neill’s company, but at night she will serve in his home at his whim. To her surprise, Rylie soon discovers that both roles have their rewards, and she begins to enjoy the evenings she spends naked, awaiting her master’s instructions. But as the end of her six months approaches, can Rylie and Neill turn their newfound romance into more than just a temporary arrangement?

He finally spoke. “Bend over across my desk. Stretch out your arms and take hold of the corners. That will make it easier for you to stay in position for this spanking.”

Legs shaking, Rylie did as she was told. When she leaned forward, she was acutely aware of the hard smooth wooden surface pressing against her sensitive nipples. Her legs were long and when she bent over, the heels raised her ass up higher than the rest of her body. Sullivan just sat there behind her, unmoving, and she shivered, imagining him staring at her stinging red bare bottom poised over the edge of his desk.

She heard him get up and watched out of the corner of her eye as he went over to the credenza and slid open one of the drawers. A stab of fear replaced the arousal when she saw what he was getting. A flat wooden paddle about six inches wide, easily a foot long, with a narrow handle, like the ones she’d seen hanging on the wall at a frat house party she went to in college. Rylie panicked and bolted upright.

Sullivan’s hands guided her firmly back into position and he stepped into place behind her. “In the future, you’ll be required to count the strokes. But today I expect you to simply submit to this paddling without any fuss.”

His arm pulled back and the first stroke came without warning. Rylie shrieked. This pain was much worse than the hand spanking had been. She didn’t know how she would be able to take twenty-five strokes on her already aching bottom. The long paddle covered both cheeks of her ass with each whack, and bent over the desk as she was, there was no way to avoid the blows. She was almost grateful when he held her firmly in place over the desk with one arm across her waist after the first few whacks, since she didn’t think she would be able to maintain her position throughout the whole agonizing ordeal.

Rather than prolonging her torment, Sullivan seemed to take pity on her. He delivered the rest of the promised swats quickly. She barely had time to register the cruel bite of each one before the next landed.

Somewhere around the tenth whack, Rylie lost all pride and began crying openly, her tear-stained cheek resting on the cool surface of the desk. She quit counting in her head, struggling just to stay in place as the harsh strokes rained down on her. Her ass was burning, but the humiliation she felt at that moment was even harder to endure. When he tossed the paddle aside and once again began stroking her hot, quivering flesh, she simply lay across the desk unmoving, all the fight drained out of her.

One hand roamed, slipping down the crack of her ass to delicately probe between her legs.

“You’re very wet.” He leaned over, whispering in her ear, and trapping her body beneath his. His lips brushed up against the side of her neck and Rylie shivered when his hot breath was followed by the tiniest flick of an even hotter tongue.

“I’m proud of you. You took your paddling like a good girl tonight,” he murmured. “Would you like to be rewarded for behaving so well?”

His hand moved further, the tip of one finger slipping up inside her. Rylie moved instinctively, shifting her legs, opening herself to his touch. He laughed, low and deep in his throat, and stroked back and forth, spreading the slick wetness up until his fingers reached the hard nub of her clit. He circled it with the pad of his thumb, then took it between two fingers. Rylie could feel it getting harder. Sullivan kept on, stroking her clit, making it pulse and throb with need. Every now and then he shifted, moving his fingers to delicately stimulate the sensitive nerve endings in the tip.

Rylie gasped, trying desperately not to writhe around. She was afraid that if she moved, he’d either begin spanking her again or stop the exquisite torment his fingers were creating. She’d never been touched that way by anyone. To her dismay, the embarrassing, helpless position in which she was posed only seemed to intensify her arousal.

She moaned softly. When he withdrew his hand, she realized he was going to make her say it, admit what she wanted out loud.