Bared by the Billionaire by Kallista Dane 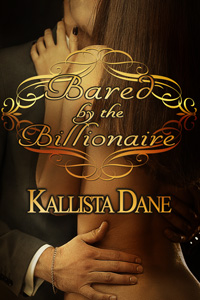 Kyra Thornton is in serious trouble. Her former boss has disappeared after stealing every dime from the company’s trust account and framing her for the theft, so when the FBI offers her a way to prove her innocence and escape prosecution, she hesitantly agrees. All she has to do is go undercover, take a job working for billionaire technology entrepreneur Jake Harmon, and find evidence to prove the FBI’s claims that he masterminded the crime.

There’s just one catch: Jake is a dom, and he’s looking for someone who can be both a financial officer for his company and the perfect sub for him. Kyra has never been a sub—or wished to be one—but under the circumstances she is left with little choice, and she soon finds herself stripped bare and on her knees awaiting Jake’s every command. To make matters worse, her new master quickly proves more than ready to punish any disobedience with a long, hard, deeply humiliating spanking.

But to Kyra’s shock, Jake’s firm-handed dominance and skillful mastery of her body leaves her not only blushing with shame and aroused far beyond anything she’s ever experienced before, it also leaves her yearning for more. It isn’t long before she feels a growing need to submit both her body and her heart to the dark, mysterious billionaire. But when the time comes to fulfil the bargain that kept her out of prison, can she trust Jake to protect her, or will she cast aside her newfound love to save herself?

She stood, legs shaking a little from the time she’d spent crouching on her knees. He slid his hand down, giving a tug to the mass of dark curls between her legs. “This will have to go. I don’t like anything in my way. You’ll be strapped down on the table in my lab and waxed. Now spread your legs. Wider.”

His hand moved further, one finger dipping into her slick folds. “Wet already. Good. I was told you are an excellent sub. Turn around.”

She turned and he grabbed both of her hands, pulling them behind her back and running a narrow chain through the metal rings on her cuffs. He clipped the ends together, leaving a few inches between her wrists. Kyra was shocked at how much the sudden feeling of total helplessness ramped up her arousal.

“Bend over,” he said. Awkwardly she bent forward, trying to maintain her balance in the six-inch heels. He wrapped one arm around her waist, holding her in place. The other hand traced the cleft between the twin mounds of her ass, framed by the belt of lace and the black straps of her garters. His fingers probed. She clenched her cheeks together. He stopped and slapped the inside of her thigh, hard. “Keep those legs spread wide. You will open yourself to me whenever I want.”

“You’ve never been fucked in the ass, have you?” He kept going as he spoke, moving his finger in and out, a little deeper each time.

“No… sir,” she replied, her voice ragged. It’s too much, the voice in her head was crying out. I’m not ready to have my most wicked fantasy come true yet.

“After you’re spanked long enough and hard enough, you’ll be begging me to do it.”

He withdrew his finger so quickly she couldn’t help giving a little gasp.

He ran one hand down her thigh. “The seams on your stockings aren’t straight. I can’t abide sloppiness. You need to be punished for that.”

Half-carrying, half-dragging her to the nearby loveseat, he bent her roughly over the arm. She watched out of the corner of her eye as he went to a tall cabinet against the wall and opened it. Inside was an array of paddles, riding crops, and bizarre implements she’d never seen before. Her breath quickened. She was about to be spanked—a real spanking. He turned and she quickly cast her eyes downward, hoping he hadn’t noticed.

He came toward her, and she heard him slapping something against his palm with each step. “Later on, I’ll occasionally have you choose the implement I use for punishment sessions. I find that requiring you to select your own tool of discipline drives home your submission. Besides, I’ll enjoy watching you pick up the various whips and paddles, trying to weigh which one will inflict the least amount of anguish against your knowledge that making a decision that displeases me will earn you severe consequences.”

She was still trying to process what he meant when she heard a crack, followed milliseconds later by a blast of pain like nothing she’d ever felt before. Her eyes flew open and she gasped.

“But for now,” he was saying. “I’ll use this.” The long wooden paddle he’d chosen covered her entire backside with one stroke. “Yes, it’s old-fashioned, but still effective.”

2014-10-31
+admin
Previous: The Newsletter Era Begins…
Next: The Westerfield Trilogy by Renee Rose