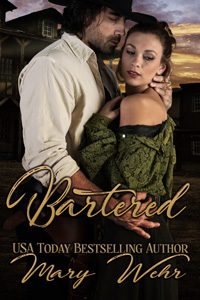 After her no-good drunk of a father tries to trade her for a bottle of whiskey, nineteen-year-old Emma Foley ends up as the reluctant ward of Jake McCabe, the stern, handsome man she spent years doing her best to annoy. But now that she is under his authority, things will be different, and when she is naughty Emma’s cute little bottom will be bared and very soundly spanked.

Though Jake is the less-than-enthusiastic owner of the saloon his late father established, he has no intention of allowing Emma to become a working girl, and when he catches her flaunting her body in a scandalous dress he punishes her thoroughly. The strict chastisement arouses them both intensely, however, and it is all he can do to keep from ravishing her right then and there.

With her need for him growing more and more obvious every day and his ability to control himself slipping away, will Jake make Emma his bride before he claims her beautiful body?

Emma took a deep breath for courage before slowly turning around. His hands were resting on his belt buckle, his expression dark and his demeanor clearly foretelling. Any thoughts of a simple warning vanished.

“You mean Papa Jake. You’ve been a bad girl, Emmaline.”

He flipped the buckle open and pulled the belt from his waist. The zip of leather sent a shudder of dread throughout her entire body. She eyed the door. Could she outrun him?

“I wouldn’t if I were you. Simply because wherever I catch you is where I’ll bare your bottom.” Evidently, he had guessed her intention.

“What if I swear not to disobey you ever again?” She frantically searched his face for any sign of mercy and found none, not even a teeny tiny smile.

“We’ve been through all that before and the result is always the same. You refuse to listen, but it’s not all your doing. Your father did a piss poor job of raising you and I intend to correct that mistake shortly.” With belt in hand, he strolled to the bed and settled himself close to the edge. “You’ve never been spanked before, have you?”

“Ma didn’t believe in paddling. She always made me stand in the corner when I was bad.”

He actually cracked a smile. “You must’ve spent a lot of time in the corner when you were little.”

“I wasn’t bad every minute of the day,” she retorted crossly, her eyes on the folded belt dangling between his spread knees.

“Each minute you dilly dally I’ll add another stroke to the twelve you’re already getting.”

“Uh-huh. An even dozen.” He pointed to the spot between his legs.

Emma stomped over to him and spat, “Jake McCabe, there are times when you make me want to scream.” With him sitting they were finally of the same height, and when he grinned, she could almost feel her heart flip-flop inside her chest.

“Women tell me I have that effect.”

“I don’t want to hear about your women.”

She was jealous all right, but she’d die before admitting it. “Of course not and wipe that stupid grin off your face.”

“Enough stalling. You’ve been asking for this since you were a little girl.” He pulled her forward. Losing her balance, Emma fell against him and he wasted no time tossing her over his knees.

“Hands flat on the floor.”

“I can’t reach the floor, you big bully.”

He shifted her position. “What about now?”

Fed up with being bounced around, she angled her head and glared. “Barely.”

“Ouch, that hurt. Are you trying to kill me?”

“Poor baby.” He dished out two more lashes then she heard the belt hit the floor.

A minute or two had passed without one word from Jake. She raised her head slightly. Was her punishment over? Should she get up? Three swats with his belt and all was forgiven? If that was the case then she’d gotten away easy.

Emma gently tensed her buttocks and blew a sigh of relief. There was very little pain, only mild discomfort. She had escaped serious punishment. She grinned. She knew he wouldn’t carry out such a severe spanking, but it wouldn’t do her good to crow about it. She’d act contrite. Assure him that she had learned her lesson.

It was on the tip of her tongue to offer him a sincere apology when she was lifted onto her feet and forced to stand between his knees.

He placed a finger to her mouth, cutting off the rest of her words. “Pull down your pants, Emmaline.”