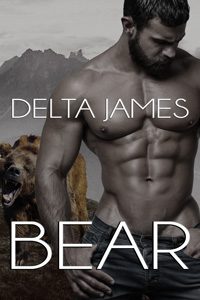 For centuries he roamed the mountains, restless and wild. Then he chose me as his mate.

He was a man once, long ago. Now people say he is nothing more than a myth, a legend, a story locals tell one another around the campfire. The tale of the mountain man who became a bear.

But I know better. He saved my life, and he watches over me still. Because I belong to him.

The man in him is old-fashioned, from a time when a headstrong woman was taken over a knee, but the beast in him is as wild as this land itself, and when he claims me it will be truly savage.

Halley heard Cade open the dry root vegetable storage bin and pull something out. He then grabbed his knife and began to whittle away at it. When he’d completed whatever it was that he wanted to do, he came back to her. She could detect a pungent, spicy aroma.

“On your belly, Halley.”

She complied without another word. Cade gently parted her legs and collected some of her natural lubricant and applied it to her dark entrance.

“No,” she whispered but didn’t try to move away from him.

He didn’t respond but separated her butt cheeks and reached beside him and lifted whatever it was he’d retrieved from the storage bin. The object pressed against her rear passage. It was about the size of his finger and she reminded herself that having his finger inserted back there hadn’t been too bad. He pressed it forward and then tapped on it until she could feel it had reached its total length and it flared out.

Cade sat down beside her but remained silent. He rubbed the small of her back as he rested his other hand on her rump. She’d never admit it to him, but this wasn’t all that bad. That thought was just completing when her back channel started to feel uncomfortably warm and the burn began to spread all along the length of the object he’d inserted.

“No. The ginger needs to remain until it has done its work.”

“Not yet. I’m going to let you up and you will go back to your place on the wall and stand like a good girl showing me your bottom hole and your pussy. Can you do that?”

“Yes, but please take it out.”

“No, Halley, the ginger will remain. If you behave, I’ll take it out before I fuck you. If not, it can stay where it is.”

Cade released her legs and sat motionless. Halley was now crying in earnest and her bottom burned in an entirely new way. She stood without his assistance and went to stand facing the wall.

“I can’t see your pussy, Halley. You will stand there displaying yourself to me for as long as I choose to have you do so. The longer you disobey and fuss, the longer that ginger remains in your ass. Obey me, Halley.”

Halley put herself in position to ensure she was presenting herself to him in the way he had ordered. The minutes felt like hours. She couldn’t help the tears that slid down her cheeks. She almost jumped out of her skin when Cade rested his hand on her aching backside.

“Has the ginger convinced you that being obedient and doing what you’re told is a much better idea than misbehaving?”

“Are you sure?” he asked with no rancor left in his voice.

“All right. You can go back to our bed but you get on your knees with your ass up and offer yourself to me to remove the ginger and be fucked. Seeing your naughty bottom being disciplined has made me very hard for you.”