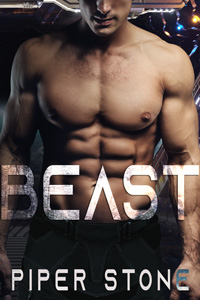 When a beast claims his mate, he does not ask… and he is not gentle.

Primitive, irresistible need compelled him to claim me, but it was more than mere instinct that drove this alien beast to punish me for my defiance and then ravage me thoroughly and savagely. Every screaming climax was a brand marking me as his, ensuring I never forget who I belong to.

He’s strong enough to take what he wants from me, but that’s not why I surrendered so easily as he stripped me bare, pushed me up against the wall, and made me his so roughly and shamefully.

It wasn’t fear that forced me to submit. It was need.

Another volley of hard smacks was given to my sore bottom even as I attempted to get away from him again.

Do not fight me, human.

I heard him fucking loud and clear. I was out of breath, the limited air making it very difficult to breathe. I knew well enough to know I had to reserve my strength and take regular breaths. I stopped fighting him even as he wrapped his hand around my neck, jerking me even closer. This time, I wouldn’t be getting away.

Helplessness wasn’t something I understood. I’d worked so hard my entire life to be self-sufficient, never taking handouts. To that end, almost no one had tried to take advantage of me.

The few who had had received my wrath.

This… monster would be no different. You may take my body, but you don’t own me.

The slight hesitation in his actions was the only reaction I received and for some insane reason, it caused me to laugh. I continued doing so until as he slid the tip of his cock up and down my slickened pussy.

His breathing became ragged, his hand moving to my hip, the sharpness of his nails digging into my skin as he pressed his shaft just inside.

For all the wrong reasons, I held my breath, as if the being behind me was my lover instead of a carnivorous beast. When he thrust the entire length of his cock deep inside, I opened my mouth in a silent scream.

He was so large that as he forced my muscles apart, I gasped several times. When he was fully seated inside, something unreal occurred.

His cock began to throb, vibrating in a way that was completely unnatural and the most incredible moment of bliss I’d ever experienced. As his cock filled me, so thick and long, the amazing vibrations created mind-blowing sensations rocketing through every cell and pore. I was blown away as I was tossed into pure ecstasy, raw and all-consuming. Every part of me was on fire, my nerve endings seared.

“Oh. Oh. Oh.” My moans echoed in the chamber, a sick reminder that I was actually enjoying this.

He was brutal, rocking me forward with every barbaric plunge, pitching us both close to the dirt. His wild howls and roars filled the space. He was nothing more than a crazed beast claiming its prize, one he’d waited for so long to receive.

“Uh. Uh. Uh. Uh.” Once again, stars floated in front of my eyes as the fucking continued, his fingers flexing then squeezing my neck.

I was being fucked by an alien.

The words filtered into my mind one after the other, pleasure unlike anything I’d ever known spinning me out of control. When he released his hold on my neck, I slumped over, issuing guttural sounds of my own.

The beast dragged his fingers down my back to the crack of my ass. The moment he pushed his thumb to my puckered hole, I tensed, clawing at the dirt. “Oh, God. Oh, God. Oh…”

No man had ever fucked me in the ass. No beast would ever use me in that manner. My sounds became nothing but animalistic as I tried to slap his hand, but there was no fighting this brute. He simply took what he wanted, shoving his thumb inside.