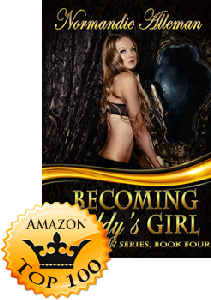 In this book we get the story of Kimberly and Charles. We have seen how this couple has their HEA in the other three books. In this one we find out how it all began. In this book Kimberly is fighting her feelings for Charles she knows that she might have stronger feelings than friendship but doesn’t want to act on them because he is still married to Vanessa. Though she feels bad for all the problems that Vanessa gives him she knows unless he leaves her on his own they can’t be together. However when something happens so to Charles in Iraq everything changes.

Charles has always been the kind of man to stand by his woman and honor his commitments but he can’t be in this marriage any more. No matter how much he gives she is doing nothing but verbally abusing him and he won’t have his son growing up watching this happen to his own father. So to pay off their debt and help him to afford a divorce he closes down his construction company and goes to work in Iraq for a 2 year commitment. Shortly after arriving though he ends up with a cut and an infection that threatens to take his life. During this time he is e-mailing back and forth with Kimberly and they are developing a bond that he has never felt in his marriage.

First let me start off by saying that Becoming Daddy’s Girl was absolutely incredible. As an Army wife this story hit incredibly close to home for me. At times I found myself having difficulty reading parts of it because I was so busy relating (my husband is currently deployed) to what military spouses go through during time of war or deployment. Normandie Alleman hit every single emotion the fear we feel, the sadness, the anger, waiting in anticipation and wondering will he/she come home. Will I ever see him or her again? I found myself in tears more than once in this amazing book over emotions that were brought up by this amazing author. Not only did she create a profound connection for the characters but she created such a deep connection for the reader so much so that it was hard to let go of the story at the end. I really wanted it to continue and I want this story to work out so badly for these two that I find myself rooting for them. This storyline was honestly perfect it is one that we face in the military quite often and the fact that this amazing author was able to tell this story with so much accuracy to what actually goes on inside our lives was incredible.

This story was full of suspense, some intense drama, there are some love to hate characters in there too! Some incredible hot and steamy action which had me fanning myself quite a few times and Charles is one HOT alpha male! This is one of those stories that just grabs you by the eyeballs and sucks you in from the very first page.

So take my advice and don’t skip this one it’s good! She does leave us hanging a bit at the end but I did get the feeling it was a to be continued kind of book. So I’m hoping we see more of Charles and Kimberly because I have a feeling their story is just beginning.

If you haven’t downloaded or read this book don’t wait it was amazing!

★★★★★ Miranda BookWhore @ Amazon.com “Five Emotionally Charged Stars and Four Wet Panties” on October 2, 2015
Reader beware — if you don’t enjoy Daddy/little girl subject matter this book may not appeal to you.

I have to say, every time I see that Normandie Alleman has added a new book to her Daddy’s Girls series I get all kinds of excited. These are a complete guilty pleasure for this book whore. Becoming Daddy’s Girl is one I’ve been secretly hoping for since the first book, Daddy Morebucks, and it is so much more than I could have imagined.

Vanessa is horrible. Just horrible. I wanted to strangle her so many times that I lost count. I kept cursing Alleman for creating this despicable character, but then when I finished reading, I realized the pure genius of having such an unlikable character. Well played, Alleman, well played. For every time I wanted to strangle Vanessa, I wanted to wrap Charles up in a big hug and make it better. Without her, it would have taken me longer to fall for Charles, instead I felt for him from the very start.

I adore Charles. There are so many little things that happen throughout the novel that made my heart squeeze — a true romantic. He could have been a bitter jerk because of his marriage, but no matter how terrible it got, he grew as a man and was determined to be better. Swoon. And the way he loves his son, Benji, talk about ovary explosion.

Then we have Kimberly. Big hearted, loyal, sweet, kind, and so deserving of a happily ever after. The way she so fiercely cared for Charles, and how supportive she was of him, makes her one of the most endearing heroines I’ve read in quite some time. When they finally get the chance to come together as a couple, the passion is not only off the charts hot, but beautifully emotional. The connection they have is deep and you can feel it in every page.

Becoming Daddy’s Girl is by far the most emotionally charged book from Alleman to date. I don’t want to give much away as far as the storyline itself goes, but I have to mention the email correspondence between Charles and Kimberly. It’s not unusual these days to see back and forth between characters via email and text, but the way this is done was intimate. And getting to experience each interaction right along with Kimberly was like crawling into her head and living the moments through her. Amazing.

ARC Review by Miranda at Mommy’s a Book Whore.

Charles and Kimberly were friends before he left for Iraq. While he was there they became closer. He was seperated from his wife, but still legally married to her. He comes home to heal after an injury and the hopfully soon to be ex does not want anything to do with him refusing to let him into the house, she dumps him off at a hotel. She is a spitefull and verbally abusive woman. This is a twist because normally it is an abusive husband. Kimberly helps Charles and even though there is an attraction there, she plans to keep it just friends until the divorce is done. Notice I said plans, because you have to have a plan to change a plan. They go through alot together including trying to get the ex to sign divorce papers. I love how they grow into each other and discover the “daddy – little girl” relationship and how it truly is not that far off from where they are already.

I did want more at the ending but know there is more of this story in the other books.

I received a copy of this book in exchange for an honest review.

★★★★★ Eva P. “Realistic love story!” on October 2, 2015
I literally wanted to reach into the book pages and bitch-slap someone. I think it’s great when an author’s writing makes us feel so much. That person is Vanessa, currently married to Charles, she has made his life a living hell. He has finally had it with her manipulative ways, what makes it hard for him to leave her is his son Benji, he doesn’t want his son hurt.

Kimberly has been working for him for a while now and while nothing untoward happened, she has started falling for her boss. When Charles decides to he needs to go to Iraq in order to procure enough money to pay off his debts (that Vanessa has incurred), he and Kimberly begin a pen-pal correspondence. However, not too long into his commitment in Iraq, he is injured and it becomes gravely infected. He comes home to recover but Vanessa cannot be moved to care for him, so Kimberly does.

This is where I just adored how Charles and Kimberly become a couple. I think it really had to do with the correspondence they had going via email, it really was very touching. At his worst, he finds true love and Kimberly already in love with him does what she can to help him mentally and physically. A truly modern day fairy tale love story. You will not be disappointed, if you’ve read Normandie’s previous books in the series you will definitely recognize some of her other characters and of course seeing how Charles and Kimberly came to be an established couple.

*ARC received in exchange for an honest review

I absolutely adored this book best out of the entire series! Though the DD/LG aspect only comes in towards the 75% mark of the book and it is pretty mild, it is still a great read. The front portion of the book was pretty much about of how their relationship formed and grew. I adored Charles and his protectiveness! And I love that he’s always down for some rough play. I’m gonna alike him to a teddy bear. I love how fierce and sincerely Kimberly cared for Charles.

His (ex)wife, Vanessa, is an utter bitch though. There were so many time I wanted to just run her over with a truck, multiple times and be done with it. I wanted to wrap Charles up in a hug and soothe his hurt away. What an utter witch. I’d be glad to see karma slap her in the face!

I have a complaint! The story ended so abruptly I didn’t know what to do but to cry in despair. Dramatic, I know but it ended without a definitely ending and epilogue! I like my happy endings! And I’d like to see the witch get burned on a stake and them to have more steamy sex! Overall a love for me <3