Becoming His Pet by Measha Stone 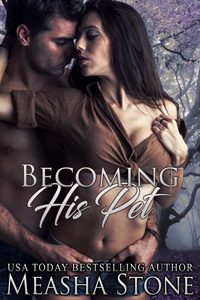 After she witnesses a mob hit, twenty-five-year-old Nora Santucci avoids becoming the next victim only due to the timely intervention of rough, battle-hardened ex-Marine Greg Turner. But when she tries to run, her rescuer takes matters into his own hands, making it very clear that he will not hesitate to tan her cute little backside if she doesn’t start doing exactly as she is told.

Insisting that she won’t be safe in the city, Greg brings his beautiful, feisty prisoner to his secluded hunting cabin, where he sets about getting the truth from her. When she lies one too many times about her connection to the man who was killed, Nora quickly finds herself bound, gagged, and sobbing as she is thoroughly and painfully punished, but even with the welts from her captor’s cane crisscrossing her bare bottom, her intense, helpless arousal is undeniable.

Nora’s desire only grows stronger when Greg informs her that from now on she will be his little pet, and soon she is blushing crimson as he brings her to a quivering climax in her cage. Wearing a tail and eating from a bowl on the floor merely increase her need for him, and by the time he claims her she has been made to beg for it more shamefully than she would have thought possible. But when the time comes to return to Chicago and Nora discovers that her trust in an old friend turns out to have been badly misplaced, will it end up costing Greg his life?

Publisher’s Note: Becoming His Pet is a stand-alone novel which is the fifth entry in the Owned and Protected series. It includes spankings, sexual scenes, intense and humiliating punishments, and strong D/s and pet play themes. If such material offends you, please don’t buy this book.

“Now. I told you if you were naughty you’d have to wear the naughty tail, didn’t I?” he asked, rubbing the oil over the silicone plug.

“Yes, sir,” she said, though the sound was mumbled with her speaking while upside down.

“Good, pet.” He grinned down at the tail. All lubed up.

When he joined her at the wooden horse, her ass clenched up.

“Ease up, pet.” He patted her cheeks. Such a pretty little bounce to them. The bruises from her caning were fading into soft purples and yellows. It would be a few more days before they were gone completely. Hopefully, she’d manage to stay out of trouble that long.

Pulling her ass cheeks apart, he found the tight hole. He promised himself he’d fuck that hole one day. And soon, but today, it needed to be punished.

“Push against me, pet. Accept your punishment.” He pressed the tip of the plug against the tight ring and waited until she bore down and the ring relaxed before he thrust forward. He didn’t take his time, he wasn’t gentle, he shoved the plug into place.

She cried out and tugged on her binds, but she wasn’t going anywhere.

“Shhhh.” He twisted the plug to the right and left before seating it fully into her ass. “It’s going to get worse, save your energy.” He stroked the long hairs of the ponytail he’d inserted.

“Oh! No! Something’s wrong!” She wiggled and tugged, but he kept stroking her tail.

“Nothing’s wrong, pet,” he assured her.

“That’s the ginger oil doing its job. When you clench it makes it worse, you might want to relax.” He spoke softly.

“And I said to accept your punishment. Now be quiet,” he continued, petting her tail.

“Take it out! Just use the cane!” She tugged again, making the wooden horse jolt.

She moaned but stopped tugging. Slipping his fingers between her legs, he found her wet sex. Wanting and waiting. And it would continue to be deprived.