Bend Over, Girl by Kenny Walters 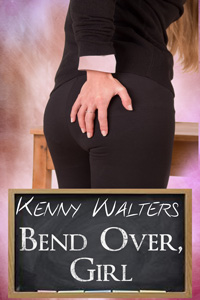 This book contains six short stories from a writer who many will know from magazines and spanking websites. Typically realistic and often based on real-life events, they depict punishments in British girls’ schools with one having a modern Australian setting.

Fair’s Fair
Two girls are punished by the headmaster for bringing alcohol into the school, but that’s just the start of it.

The Twist
Two girls feel hard done by when a particular prefect reports them to their headmaster. When the same prefect is responsible for their second visit to the headmaster’s study, it sets them thinking.

What I Really Want
Misbehavior in class leads to an unexpected request, although the teacher isn’t sure whether he really wants to go along with the idea.

Sixth Form Smoking
Two girls are caught smoking, but their punishment is not entirely conventional.

The New School Secretary
Stella is very pleased to have secured a new job working as an assistant school secretary in a girls’ boarding school. The girls like her too, but then one takes advantage of Stella’s friendliness.

The Escort
Persistent failings result in Karen Donaldson having to attend a disciplinary meeting with her teacher, who decides she has insufficient powers to deal adequately with the girl. Thus Karen finds herself being escorted to an even less pleasant meeting with the Sixth Form Principal.

Publisher’s Note: While the stories in this book share a school setting, it is made clear in all of them that the characters are over the age of eighteen.

Standing in front of the headmaster’s desk, both with their hands behind their backs, the two girls looked down at the walnut surface, now devoid of all the paperwork and pens that had been there earlier. Even the telephone had been removed. It was not the strangely clear desk that caught their eye, though; it was the slender three foot long cane that rested there, a cane complete with the traditional crook handle at one end.

John Jamieson saw the two girls looking wide-eyed at the cane and allowed them some moments to tremble and mull over in their minds the terror it represented. When Kate finally averted her gaze and met the headmaster’s stare with her own nervously darting eyes, only then did he feel the time was right.

Picking up the cane, John Jamieson gently tapped the tip on the surface of the desk towards the right hand side. “I shall ask you in turn to bend over this end of the desk. Six strokes each, if you remember.”

Both girls stood frozen to the spot, their eyes scared, their faces grim.

“Kate. As you’re the nearest, perhaps you would be so kind as to take up the position.”

Kate’s eyes flashed. Her heart pounded against her ribs before, with a nervous twitch of her head, she moved slowly round to face the end of the desk. With just the briefest of glances at the waiting headmaster, she began to lean across the polished surface. As her hands reached down to touch the hard wooden desktop, her tight skirt gripped her backside ever more snugly. Finally, with her neat breasts pressing into the desk and her arms folded below her face, Kate closed her eyes and waited.

A nervous cough from Hayley, a shuffling of feet from the headmaster and the sound of birds chirping in the grounds outside filled Kate’s ears until she felt the tip of the cane touching her gently across the seat of her tight black skirt. The reality of all she had been dreading would strike her backside at any moment.

“Uh!” The whoosh of air had been short and deadly. The crack as cane struck tight black skirt material had seemed to fill the room. Now the smarting soreness spread like fire across Kate’s shapely bottom.

“Uh!” Another sharp cut, lower this time, thwacked across Kate’s round buttocks making her entire body snatch and giving her a fresh dose of punishing soreness across her rear.

“Aa-ah!” Kate felt her eyes begin to moisten as another stroke cut into her bottom, higher than both the previous two but still smarting like the devil. She risked a glance at Hayley, and saw the blonde girl looking down, watching every move of her punishment.

2012-12-28
+admin
Previous: The Lady and the Sheriff by Carole Archer
Next: My House, My Rules by Constance Masters