Beyond Oak Street: Their Billionaire Daddies by Emily Tilton 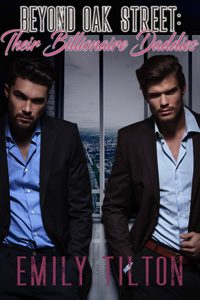 Though Tricia and Louisa now share an apartment in Manhattan with the billionaire brothers who purchased them from the Institute, their new daddies never hesitate to deal with them in the same shameful ways they remember from back on Oak Street, and they are reminded often that it is not up to them to decide when, where, and how their beautiful bodies are used and enjoyed.

But no matter how often Tricia is soundly spanked, her naughty behavior only seems to worsen. Will her daddy need to punish her cute little bottom in a much more intimate, embarrassing way?

Publisher’s Note: Beyond Oak Street: Their Billionaire Daddies is a short story which is the sixth entry in the series The Institute: Naughty Little Girls. The books of this series share the same near-future setting as the books of The Institute Series, but they are stand-alone stories. Beyond Oak Street: Their Billionaire Daddies includes spankings, sexual scenes, and age play. If such material offends you, please don’t buy this book.

“Daddy, please? I’m sorry I forgot. I’ll… I’ll pay for the new panties with my allowance. Please don’t plug me.”

“Tricia,” Joe said patiently, sure from the contrite, fearful look on her face that he had made the right decision, “turn around and bend over the toilet. Palms right on the cover and knees bent.”

She gave him a final look, her brows knit in consternation, and then she obeyed, turning and presenting her rear end in her uniform skirt, over her trim thighs and white knee socks.

“Arch your back, sweetheart,” Joe said as he flipped up her skirt. “Push your bottom out.”

Tricia gave a little sob as she complied, her lovely hind-cheeks swelling a little in the thick white briefs. Joe stepped forward a little and took her right hip in his left hand. He couldn’t resist fondling his schoolgirl’s sweet bottom in those innocent panties, letting her know that part of her belonged to him utterly. He held each cheek in his hand and squeezed it gently as Tricia emitted tiny whines from her throat to feel her daddy’s ownership of her tushy, and the hairless pussy he cupped, then, through the heavy fabric of her schoolgirl underwear, making the whines turn to a long moan.

Joe’s cock had grown as hard as iron, and the urge to fuck his bed girl before he plugged her came over him so strongly that he had to fight hard against it. He put his right hand in the waistband of the briefs and pulled them down, all the way past her knees, so that they dropped to the floor, as Tricia gave a little cry of surprise.

“Your punishment for forgetting to pack your panties isn’t just going to be the plug, sweetheart,” Joe said into her ear. “You’ve lost your panties for the whole trip.”

“You should have thought of that when you were packing, Tricia. And yes, the people on the plane will see the plug, but not because they’re sneaking peeks up your skirt. They’re going to see it because you’re going to show it to them.”

Tricia tried to straighten up and turn around at that, but Joe held her down over the toilet and fetched the lube out of his pocket. One-handed, he flipped the top open.

“Daddy… no!” She struggled against his restraining arm, but he managed to drip a healthy stream of the clear, viscous liquid onto her backside, just above the crease between her squirming bottom-cheeks.

The roar of the engines drowned out a good deal of the sound in the bathroom, but Tricia put up a fuss now that Joe thought must be audible in the main cabin. Twisting against him as he got her tiny ring ready to take something big and hold it inside her, she screeched loudly in protest.

“Shh, sweetheart. You know Luisa’s younger, and her bottom is smaller, so that’s nonsense. I should have plugged you the way Daddy Paul does with her a long time ago. And you know you already get Daddy’s penis there when he decides you need it. Hold still, now. Hands on the toilet cover. Keep this bottom pushed out.”

She quietened a little as he put the lube back in his pocket and began to work her little flower on his fingers, putting two in as soon as she relaxed for one, and making her cry out in need as much as in discomfort at the insistent invasion of her most private place. He got the purple plug—the same size as Luisa’s but a different color so they could tell them apart—from his pocket.

Tricia whimpered when she felt the rounded head of it against her anus, but Joe meant to make her understand she was being punished, and he pushed firmly. His schoolgirl emitted a cry of pain as she felt her bottom stretched as never before, and then a sob when the widest part of the plug had passed inside her. Her anus tightened around the narrower place, just in front of the flared base, that would hold her young bottom open until her daddy decided she had learned her lesson.

Tricia gave another sob when Joe pressed gently on the base of the plug, her backside bouncing with discomfort. Now he couldn’t resist, and he didn’t have to. He let her hip go, but as Tricia started to straighten up, he said, “Stay there, sweetheart. Daddy’s going to fuck your pussy now.”