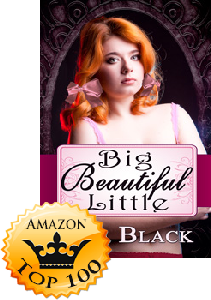 ★★★★★ Nicole Vela @ Amazon.com “Awakening!” on August 16, 2015
Tiffany Barlow, abundantly curvaceous, has just been unceremoniously dumped and in the most devastatingly cruel way. With nothing to lose she moves to another city and realizes she has to make changes! With a shaky psychic she goes to a gym, and that is where the story begins. Lance Sawyer, handsome,successful and is built like a brickhouse( ex-military), is literally dumbstruck could possibly be his luckiest day. The voluptuous woman before him has his mind reeling. Inserting his foot wasn’t in the plan, but he has to break down the wall and hold the little. Could he survive another relationship of this particular magnitude? Age play and his dominance has spurred him on. She is literally broken, could he love and nurture and rebuild her confidence and show her that beauty comes from within. Nick is a stupidhead!( sorry can’t help it). Grab Kleenex, this has to be by far the best book ever written by Elsa Black! The inner turmoil is what most grabbed me. This book touches on woman’s insecurities, mind, body and spirit. This writing is exceptional, the emotion- Elsa deserves and academy award for the writing! I cried and related to body issues, there is just so much going for the book. It’s her best book to date!! Would recommend this book to anyone looking for age play, and the beauty of a dominant/submissive relationship. Must read!

★★★★★ Virgilia Coriolanus @ Amazon.com “Come for the hot sex, stay for the plot” on August 16, 2015
What to say, what to say about this one. I thought Elsa Black’s last book, “The Doctor’s Little Ward” was going to be my absolute FAVORITE of her novels….I can see that it’s going to have to be a close second now.

Basic plot–Tiffany, an artist for a children’s book series has just been dumped by her longtime boyfriend, who basically used for her for her money, for her “best friend”. He basically tells her that she is too fat to be seen on his arm at corporate events. So with that, and advise from her therapist, she sets on on a journey of self improvement. First thing to do–join a gym.

The hot gym owner, who is attracted to BBW’s, Lance, makes the immediate kerfuffle of paying her a compliment, which in her mind registers as a come on to get her to come to his gym……and thus their first meeting and relationship is borne from that moment.

The things I loved about this book were Tiffany’s insecurities. They are real–her weight, her voice, her overall attractiveness. It’s something that every woman worries about, no matter her looks. So this is something that you can connect to, in a world of where 90% of the romantic novels that you read–whether they be age play, historical, etc….are played by women who are simply too gorgeous to even look at with both eyes.

I also loved that Lance worked with her on HER boundaries and comfort zones–like with her weight. I believe she was about a 16/18, and she talked it out with him and said that she wanted to be a 12/14……..he wanted her to feel her best. At whichever weight that felt best for her. And I also liked that he faced everything head on, no games.

The touch I really loved was Tiffany’s insecurity about her stretch marks. I got a lot, not just from weight gain, but just from puberty and my boobs growing overnight, so I definitely felt how she was feeling at the scene where she didn’t want Lance to see her fully naked because of them. So realistic and tender!

Lastly–I love the end of Tiffany’s ex boyfriend. If only all men who used women like that (I unfortunately happen to be related to one), ended up in a jail cell.

I loved Lance’s dominance because he mixes it with a lot of nurturing a woman like Tiffany needs. I don’t think this book would have worked if he’d just spanked her without having that healing part thrown in.

I fell in love with Elsa Black’s age play with the Eden series, and thought it would be hard to fall in love with new characters but this book sold me from the start. It’s not just a hot romance with lots of sex and dominance and submission. It’s also a really intimate look at the kind of transformation that can take place when a woman finds a man who really appreciates her for who she is.

★★★★★ Alicia Janowitcz @ Amazon.com “She’s got me hooked!” on August 16, 2015
So many reasons to love this book! Another great age play read, but Tiffany’s troubles are ones many women can understand and it is wonderful to see a loving relationship where she learns to accept herself just the way she is. There’s now a connection with the Eden Institute books Ms. Black has written (under the pen name Ava Sinclair) and I look forward to seeing how she connects these different series together. She’s got me hooked!

★★★★★ Soundslikefun13 @ Amazon.com “Great book” on August 16, 2015
Big Beautiful Little is a great age play story. The characters are easy to fall in love with. The story is enjoyable and easy to follow.

★★★★★ EuphoriaWasted @ Amazon.com “Elsa has done it again!” on August 16, 2015
I confess that I am already a fan of Elsa’s work but this one touched a certain place with me… well… a few certain places. I immediately identified with the main character as I think a lot of women, not just bbw’s will. She as always has a delightful cast of character which you both love and hate. I found myself talking out loud at some points to the book and shaking my kindle in frustration and anticipation.

Having read her other books, there was a surprise at the end that made me squeal with delight and damn it, now I can’t wait for the next one to come out! I’m addicted.