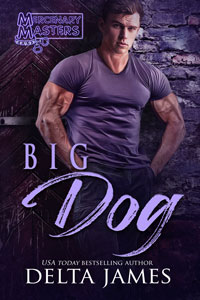 The last time they met, Wyatt Moore took Makenna Dalton over his knee and spanked her bare bottom, then bent her over the couch and taught her what it means to be truly put in her place.

Then duty called and he thought he might never see her again. Until today…

Now she is not only under his protection, but in his custody, and he’s more than ready to blister her beautiful backside as often as necessary to ensure her recklessness doesn’t get her killed.

She’ll be wet and needing more when he’s done, but this time he won’t be leaving her that way.

This time he won’t be leaving her at all.

He’s keeping her, whether she likes it or not.

Publisher’s Note: Big Dog is a stand-alone novel which is part of the Mercenary Masters series. It includes spankings and sexual scenes. If such material offends you, please don’t buy this book.

Wyatt raised his hand and brought it down, smacking her ass with more than a little sting. The first was followed by a second, sending pain burning across her skin. Again and again, he swatted her backside, the heat flaring across her flesh. She didn’t try to count; she trusted that he wouldn’t give her more than he had said was due. He wasn’t holding back; her tears began to flow as he laid into her.

She cried out and then felt the deep peace that only subspace could bring begin to creep over her. Makenna continued to feel the harsh strikes of his hand, but more than that she could feel her brain going into neutral and her libido going into overdrive. Like the flogging, she felt centered and more connected to this world, but more than that, she felt connected to Wyatt.

Finally, after what seemed like forever and no time at all, his hand came down for the last time and he let it rest there for a moment before he caressed lightly, sensuously… every bit as much to arouse as to soothe.

“I’m proud of you, Makenna. You took your punishment really well. You’re gorgeous and your skin is so beautiful,” he said as his hand slipped between her legs and found her soaking wet. “I love seeing how nice and pink your ass is and knowing it’s because you accepted my discipline.”

Mak felt as though they had done this a thousand times before in dozens of previous lifetimes. She had never allowed a dom to speak to her so intimately, so seductively. She wondered if her pussy looked the way it felt—warm, soft, and very wet. She drew a ragged breath as he ran his finger from her slit to her clit and rubbed the lubrication from her pussy into her swollen nub.

She briefly wondered if like in her dream, she’d come for him when he penetrated her with his fingers, stroking her rhythmically. She had a feeling she was going to scream and writhe beneath him. It had been so long since she’d done anything more than fantasize about having sex with a man.

Mak started to push off his lap, reality beginning to intrude. His hand cracked down and she yowled.

“You stay where I put you until I tell you that you have my permission to do otherwise. Understand?”

He caressed her painful globes. “Good girl,” he crooned.

When she allowed herself to slump back over, he lifted her off his thighs, turned her, and settled her back onto his lap. He had her sitting close to his body so that her head fell naturally onto his shoulder, nestling his neck. She liked the way he smelled as he brushed his lips across her forehead. His cock was still pressed against her now very painful backside.

“I know the contract said sex on demand, but I’d like to think you wanted it.”

She took the hand that had been resting on the top of her thigh and guided it back to her pussy. “I want it, Sir. Please?”

2021-03-07
Chris
Previous: Kept by Him: A Dark Mafia Arranged Marriage Romance by Measha Stone
Next: Taught by the Doctor by Aurie Jameson