Blushing for Her Masters by Samantha Madisen 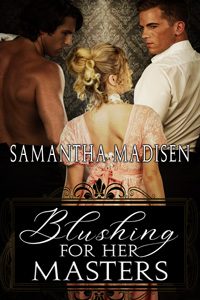 After her parents squander the family’s fortune, eighteen-year-old Jane Peaton is left with no choice but to take a job as a maid for wealthy gentlemen August Hunter and Dr. Finn White. Upon arriving at the estate of her new employers, however, Jane is shocked by the scandalously revealing uniform they have provided for her, and a painful, humiliating bare-bottom spanking soon follows when she refuses to cooperate during an intimate, shameful medical examination.

Before her ordeal is over she has been thoroughly cleansed, fitted with a plug, and brought to an intense, shattering climax by the handsome doctor while his ruggedly sexy stepbrother looks on. Despite her blushing cheeks and burning bottom, Jane is left desperately aroused and longing to be taken hard by both of her masters, but when she discovers that she must be properly trained before they can claim her, will her reckless impatience end up getting her in way over her head?

Publisher’s Note: Blushing for Her Masters includes spankings and sexual scenes. If such material offends you, please don’t buy this book.

The room, in all of its magnificently tiled whiteness, was spinning so shortly after that that Jane had no idea what was happening. Her feet left the floor, her clothing shifted on her body, her stomach was suddenly pressed against something, and the floor loomed below her. She felt her undergarments shifting, but by the time she realized that they were being pulled down, and the cool breeze of the room caressed her skin, the next thing had already happened.

She heard a slap, the sound of flesh against flesh, a sound she had only imagined prior to that moment. It seemed as though a small eternity passed as she contemplated the sound, the allure of it.

And then a sharp, painful sting, almost like a bite, cracked across her bare bottom.

It was then that the entire picture was clear to her: she was over Master Hunter’s knee, her bottom was bared, and he was… he was spanking her, right there in front of the doctor.

As the first slap melted away into a slow burn, hot and throbbing, Jane felt the fire in her lady parts ignite. Something was happening down there, and she could do nothing to stop it.

A second slap came cracking through her bottom. It barely had time to burn, before a third and a fourth were issued. The pain was so sharp that it cut through the growing fire in her body, the waves of burning crashing into each other and then being cut abruptly by the punishing spanking. Hot, wet tears built up in her eyes and sprang from them, splashing onto the floor.

Jane reacted suddenly. “Sir! Let me go! This is most… this is most… oh! Please! Oh!” She began to kick, but Master Hunter’s large hand held her firmly in place, and the more she kicked, the more stinging the spanking became. She at last realized that she would have to submit to his firm hand, and quell her protests, if he was to stop. She collapsed on his knees and let the tears fall from her eyes. She was surprised that as she did this, the warm fire in her private places was rekindled, even as Master Hunter delivered several more sharp slaps to her bare bottom.

Scarlet humiliation crept up to her cheeks and burned nearly as much as her bottom. Here she was, in a room alone with not one, but two men, her most private parts bared to them, pressed commandingly to the knee of a stranger, being punished thoroughly for… for what?

At last the rain of spankings ceased, and she felt a hand on her skin, rubbing it gently. It was hot, and sent a thrilling, painful burn through the center of her body.

“At Rothhall Manor, you shall not speak out of turn, or question the motives of your masters,” the low voice of Master Hunter said.

She sobbed lightly. She could feel her lady parts welling up with the liquid of arousal, and the humiliation of that was far greater than the spanking she was suffering.

A slap made her shriek. “Repeat your master’s orders,” Hunter said.

Another spanking. She yelped. “Please. Please, no more. Please. I will be good, please…”

“Repeat what your master has told you,” the doctor said gently. “And then we shall proceed with the examination.”

She sniffled. There didn’t seem to be much of a way out of her current predicament. “I… I shall not speak, out of turn…” she sobbed, trying to remember the exact words. “And I shall… not…”

Another sting cut through her skin. “Question the motives of your masters,” Hunter growled.

“Question the motives of my masters,” she said, as quickly as she could. “Please,” she added, her bottom burning terribly.

And yet… she could not deny that the burning was delightful in its own way. She almost desired to kick and make Hunter deliver another stinging slap to her raw skin, as much as she desired to avoid it as well.

Hunter placed a hand on her bottom, and the heat of his body made the sting of her spanking heat up with a bright, almost delightful pain for a moment, before it receded in waves. Jane exhaled roughly as the waves took her up and then down, and made her ache to be touched… well, in the naughtiest of places.

Hunter pushed her by the shoulder to slide onto her feet, and she stood up, attempting, with shaking hands, to right her uniform and her hair.

The doctor smiled. “Now. Remove your clothing and the examination shall begin.”