Bound and Blushing by Piper Wynne 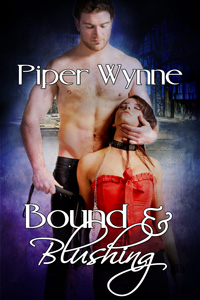 Once there, he introduces her to a pair of his friends, and soon enough she is bound and blushing as her body is explored by three dominants at once. Yet despite something inside which urges her to obey Alex’s every command, Jo cannot help testing his resolve, and the night ends with her restrained over a spanking bench for a punishment she won’t soon forget.

Over the coming weeks, Alex demonstrates to Jo just how completely he can master her body, often leaving her begging for release from the intensity of the pleasure. But though she loves giving up control and feeling vulnerable and powerless, Jo wonders whether she is more than just a plaything for Alex and his friends. When she decides to test him with a final show of defiance, will he let her go, or will he punish her thoroughly and then make her his own?

The wall was lined with an assortment of benches in various sizes and configurations. They were upholstered in black and had solid metal frames. Some of them looked like normal furniture, while others had unusual shapes and configurations, obvious attachment points, or built-in restraints.

“This one will do,” Alex said mildly, indicating a spanking bench. “Climb up, please.”

Jo looked at the bench. It had a low platform for kneeling, in front of a higher surface that angled down toward the far side. Jo bit her lip.

“Couldn’t I do it on your lap?” She wiggled her hips, expecting Alex to back down or swat her again with a surge of aggression. Instead, he smiled.

“This is a punishment spanking, toy. You’ll have to earn that.”

Jo gingerly climbed up the bench and lay her body carefully along the angled platform. It was narrower than she had realized and thickly padded in the middle, and she worried she would fall out of her dress if she lay against it. She was still trying to arrange herself when she felt a sharp swat on her ass. Even through the dress, it stung. Instinctively she reached back to rub her butt and look behind her. Alex grabbed her arm.

“Just as I thought,” he said, walking toward the front of the bench with her hand in his and a pair of handcuffs in the other. “We’ll have to do something with your hands until you get used to submitting to discipline.”

Jo felt the cold metal bite of a handcuff snapping around her wrist as Alex knelt beside the bench. Swallowing with nervousness, she gave him her other hand, and he joined the wrists beneath the bench. Jo experimentally felt along the bottom of the bench. Her hands appeared to be cuffed between two supports a little less than two feet apart. She could slide her hands forward until they were almost under her shoulders or back nearly to crotch level before the steel links banged into metal. She definitely wouldn’t be able to stop his hands or rub away the sting.

Alex stood behind her and toyed with the bottom of her dress. When she had gone without panties, Jo had thought of it as a daring way to tease him a little. She hadn’t anticipating being strapped like his with her ass up in the air and no way to tell who was behind her. He seemed to savor her embarrassment for a moment before mercifully dropping the dress into place and giving her a light swat. Jo wiggled her ass back and forth—maybe this would be fun, and a little less intense than the episode with Jim and Elise. Now that he has me tied up, maybe he’ll give me what I—

She clanged the handcuffs against the frame, practically jumping off the bench.

“Hold still,” Alex said. His voice was quiet and commanding. Jo found her hands frantically searching for something to grab onto under the bench to hold herself in place. There was nothing, and the cuffs made it impossible to wrap her arms around the bench itself. She concentrated on lying as flat as possible, shifting her knees out a bit to get a more stable position.

Jo received another smack on her backside. This time, he had used just his fingers, delivering a stinging blow that made it almost impossible to stay in place. Alex said nothing, seeming to wait to see how Jo responded. She managed to hold her body in place, pressing her stomach firmly into the bench and angling her ass up toward his hand. Alex ran a hand gently from her tailbone to the underside of her thigh.

“Now, can you tell me why you’re being punished?”