Bound by Her Promise by Jaye Peaches 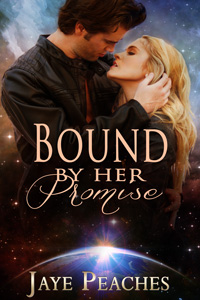 When twenty-two-year-old Lysa travels to the Outer Rim Colony on Callisto to be a miner’s wife, she isn’t in it for love or even for the fairly generous pay. She undertakes the voyage because the government refuses to let women into technological fields, and the mining colony is her only chance at learning in secret. But upon reaching the colony, it isn’t long before Lysa wonders if she is in way over her head.

Blake, the man she is to marry, brings her almost immediately to the colony doctor for an incredibly thorough, humiliating medical examination. Even more disturbing is the fact that apparently her marriage contract gives Blake the right to discipline her when he feels it necessary, including by means of a bare-bottom spanking.

After Lysa confesses to Blake the real reason she came to the colony, he reluctantly agrees to help her as long as she promises not to neglect her wifely duties. To her surprise, despite her new husband’s less-than-enlightened views on how a misbehaving wife should be dealt with, Lysa soon find herself both enjoying his company and craving his skilled, dominant lovemaking. But when the head of the colony learns that Lysa is illegally studying to be an engineer and that Blake is helping her, will they be forced apart forever?

“This will help with the discomfort.” Dr Lamont applied a layer of cold lube about her anus. It negated the effect of the whitener immediately, bathing her assaulted back hole with delicious coolness. However, the pleasant sensation was short-lived as within seconds she cringed, screwed her face up and waited for the inevitable intrusive examination.

He poked, palpating her lower belly as he penetrated deeper into her back passage. “Nice and tight here,” he remarked, again in a tone of professional detachment.

She opened her eyes and stared straight at Blake. He’d a gentle smile on his face. She lowered her gaze, down his chest until she reached his groin. The bulge in his pants had enlarged, filling the space between his loins. The strange cocktail of emotions stirred again—his obvious arousal both unnerved and excited her.

“I feel like I want to come,” she whispered. Her softly spoken words caught Blake’s attention. He straightened up, dismissed the softly focussed grin from his face and his mouth opened a fraction, as if amazed. Perhaps, behind his confident posturing, Blake was just as confused as she was?

The fingers slipped out and she sighed in relief. The impending orgasm diminished with its absence.

“You’ll need to train her. Take it slow, make sure she copes.” Dr Lamont crossed to the other side of the room and opened a drawer. He fetched out a rectangular box. Lysa perched on her elbows, keen to know what he meant by training. He opened the lid, showing Blake the contents, but not her.

Blake held up a metal butt plug, pear shaped with a tapered end. Lysa’s ability to speak failed. It looked heavy, unforgiving in nature as if designed to torture. Hardly something she’d want shoved up her arse.

“That is the smallest,” said Dr Lamont. “Start with that, build up a few hours and then the next size up, until you reach this one.” He held aloft another plug.

“That!” she screeched at the immense bung. It would tear her apart! Surely, no one could tolerate it.

“Fun?” she seethed. “You’ve got a strange idea about what’s fun. No way are you putting those in my butt.”

Her mouth opened and shut in quick succession. She wished she’d seen a copy of the contract while on Earth, but her approach to joining the list of eligible women had been less than orthodox. Now, she regretted not investigating before she’d departed Earth.

“Now are we done?” She tried to sit up, but both men pressed her back down again.

Her thumping heartbeat picked up in pace, pounding against her breastbone. She gave Blake a pitiful expression. “What are you going to do to me?”