Bound by the Buccaneer by Normandie Alleman 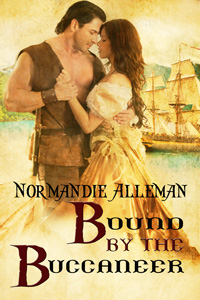 Two years have passed since Frederica joined Gaston aboard the Ocean’s Knave, and with every passing hour they have fallen more deeply in love. By day she is the ship’s physician, but at night she serves her captain in his bed, offering her body for him to punish and pleasure until she begs for more. But after a successful run of raiding other pirate ships, the couple have a target on their backs.

Their only hope is to form an alliance with a trio of like-minded captains, but in order to guarantee the cooperation of these unyielding, battle-hardened men, Gaston is forced to offer them a night with Frederica. Reluctantly, she agrees to be shared with the men, but afterwards Gaston finds it difficult to forgive himself for bartering Frederica’s charms. As jealousy and desperation threaten to consume him, will Gaston lose his beloved Frederica or can he weather the storm and find a way to bind her to him forever?

Without preamble he spread her legs wide and swiftly entered her. Her drenched cunt offered him easy access to the depths of her canal, and he drove into her like a man possessed. His strokes were long and languid but powerful, dragging out their pleasure as if he wanted to wring every drop of passion from her. His deliberate pace increased her anticipation by making her wait for him to fill her each time. She writhed underneath him, thinking that his cock plundering her pussy was so delicious she might never be able to get enough. But then he buried himself so deep inside her that she felt the tip of his penis smash into her cervix. The result was the sweet combination of pleasure and pain. It hurt, but she desperately wanted more.

His fingers fisted her hair, and he yanked on it as he fucked her. Her scalp screamed, but her pussy clamped down hard on his cock, her walls contracting around him like a vice. She arched her back and he pinched both her nipples, rolling them between his fingertips. Then he pulled them upward until her cries of lust morphed to something darker.

Then he withdrew, reached over and removed the candle from the lantern. He held it over her body, a devilish look on his face.

She felt her body stiffen, her eyes widen. He’d done this once before and the experience had been an extreme combination of pleasure and pain. Overall she’d enjoyed it, but she remembered some of the hottest droplets of wax scorching her skin.

She struggled for something to say, but nothing came to her. She couldn’t honestly say no, but if she dared to deny it, she worried if he’d think of something even more dastardly to do to her. Yet her pride kept her from admitting to fear.

“What’s the matter? Lost your voice?”

Waggling his brow he winked at her as he towered over her, candle poised just above her stomach. “That’s alright. Your face tells me all I need to know.”

She watched as the first droplet crashed against the pale, sensitive skin of her belly. The liquid fire burned. She winced and prepared for the next one.

In an unexpected but welcome move, Gaston rubbed the tip of his cock around the opening to her pussy. Her hips gyrated, wanting him inside her again. His eyes darkened with desire as he took in the picture of his helpless, wanton captive beneath him.

“Who do you belong to wench?” he asked, anger in his voice.

Another droplet of scalding hot wax splashed onto her breast, and she found herself lifting her chest searching for the next one. Something in the back of her mind told her it was insane to want more of this treatment, but she squelched the intrusive voice and gave in to her cravings.