Bound to the Admiral by Libby Campbell 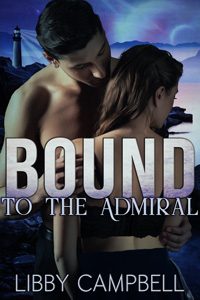 When her parents choose a gruff, battle-hardened admiral as her mate and give her no say at all in the matter, twenty-one-year-old Princess Gael does not hesitate to make her displeasure known. Despite her protests, however, her old-fashioned yet undeniably sexy future mate wastes no time in taking Gael over his knee and baring her bottom for a painful, embarrassing spanking when she defies him during an ancient ceremony intended to celebrate their upcoming union.

Fleet Admiral Kai Grenville has no doubt that taming his beautiful, feisty new mate will be a battle, but it is a battle he intends to win. If that means paddling Gael’s beautiful backside bright red with her panties stuffed in her mouth to teach her what happens to sassy mates, then so be it.

Though she does her best to remain indignant about her situation and Kai’s willingness to chastise her as often and as shamefully as he feels it necessary, Gael cannot deny her body’s response to his dominance, and when he claims her the pleasure is more intense than she would have thought possible. But with a plague ravaging their world and Gael’s reckless behavior putting her in danger, can Kai find a way to conquer her heart while also keeping her safe?

Publisher’s Note: Bound to the Admiral includes spankings and sexual scenes. If such material offends you, please don’t buy this book.

At first Gael held her breath but, as the pain intensified, she squirmed sideways. Kai stopped spanking and, with one large hand on either side of her waist, lifted her back into position.

“Do not move again,” he said, reaching for the paddle. “I’m going to redo my labors of yesterday.”

He stopped long enough to smooth his hand over her stretched bottom cheeks. “I like to see evidence of my work but there’s nothing here. Now that you’re warmed up, I can repeat the imprint of that message.”

Gael felt exposed, vulnerable, in this awful position where only her willpower was holding her in place. She stifled an urge to beg him to let her go, just this once.

Kai leaned in close, breathing into her ear. “Are you ready, Kitten?”

His voice made the heat and wetness rise between her legs. She wanted him and wanted to get away from him, at the same time. When he pulled back, she sucked in her breath, but nothing could have prepared her for the blinding pain delivered by that despicable paddle. She felt the words naughty girl bloom in a red script across her cheeks. The pain flared deep into her bottom, sending shockwaves in every direction.

Kai stopped and pushed her legs apart. The paddle dropped onto the bed, grazing her thigh. Kai’s hands moved to her bottom cheeks, prying them apart, exposing her puckered hole.

“It’s time that I claimed this virgin zone,” he said evenly, as though he might be announcing little more than the time of day. “Let’s get you ready first.”

His skillful fingers moved forward, parting her swollen lips and teasing her clitoris. She wanted to reject him, but her body had other ideas. Her hips rotated to his touch. Her breath quickened. When she moaned with pleasure, Kai stopped. He reached for the tube and butt plug and returned to his position behind her.

“Put your hands back and spread your cheeks for me,” he said.

Gael hesitated. The paddle slid off the bed and cracked across her ass again, landing exactly where it had the first time. The pain made Gael’s head spin, but her hands flew to her backside. She pulled her cheeks apart and sank into the pillows, wondering if he was going to rip her open with that phallus. To her relief, Kai dropped the paddle again.

She was collecting herself with a long deep breath when a small stream of cold gel poured down the crack of her ass. She gasped but Kai’s fingers playing gently at the opening of her butthole relaxed her again.

“This will only hurt if you fight me,” he said. His thumb pushed into her anus even deeper while his fingers played with her pearl, stroking it, teasing it.

To Gael’s mortification, her ass was opening to his touch.

“That’s my good girl,” he said, removing his hand and stepping away.

“Please no, sir,” she said in a watery voice. Her hands stayed on her butt cheeks, but she relaxed them a bit.

“Your choice. I can paddle you again to persuade you to open your cheeks properly or you can do it now and skip the paddle for the moment.”

Without a word, she pulled her cheeks apart again. Kai used his hand to stimulate her, to make her ready for penetration. The well-lubed butt plug slid in with humiliating ease. It stretched her, making her feel desperately full.

Kai pulled her panties up, dragging them into the crack of her ass, creating a wedgie that pushed the plug in tightly. His action made her roll her hips slightly and the butt plug pushed against her g-spot. A mist of sweat covered her as she flushed with pleasure, pleasure she was powerless to resist.