Bound to the Commander by Libby Campbell 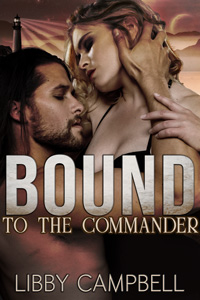 When rumors of twenty-three-year-old orphan Pepper Thornback’s incredible healing abilities reach the ruling Tribunal, Commander Quinn Garrick sets out to bring her to the capital. Pepper is given no choice in the matter, and when she attempts an escape during the journey she is taken over his knee for a sound spanking and then stripped bare for a painful, embarrassing switching.

More humiliating still, upon reaching their destination Quinn informs Pepper that she will be his ward for the duration of her stay and he will not hesitate to deal firmly with any disobedience.

Despite her blushing indignation at being treated in such a shameful manner, Quinn’s stern dominance arouses Pepper deeply, and when he takes her in his arms and claims her properly she is left utterly spent and satisfied. But when Pepper makes a shocking discovery concerning the fate of her parents, will the revelation strengthen her bond with Quinn or tear them apart forever?

Publisher’s Note: Bound to the Commander is a stand-alone sequel to Bound to the Admiral. It includes spankings and sexual scenes. If such material offends you, please don’t buy this book.

He resumed smacking, varying the tempo. Sometimes he delivered fast, hard slaps before slowing to deliberate, strong strokes. Then more scorching spanks followed. The cracks landed everywhere, pushing all thoughts from her mind. She descended into a dark place where the only reality was the pain radiating from her burning buttocks. It came in scorching sensations and bright constellations of color. It deafened her and blinded her at the same time. All she was aware of was the last stroke and the dread of the one to come.

After forever he stopped. Her bottom throbbed and her head spun both from shame and the indignity of being so pathetically exposed.

“You have a beautiful ass,” he said, rubbing her rump in a half-soothing, half-intensifying way. “I plan to spank it often. For the next while I plan to spank it every day. These daily spankings will continue until I’m confident you are genuinely obedient.”

With the heel of his hand he pushed her buttock cheeks apart slightly, brushing her puckered hole. “Your bottom is perfect for spanking. It also looks ideal for fucking.” He flicked a finger against her rim and, to his delight, felt her push back against his teasing, as if asking for more.

He slipped her off his lap. “Time for a little break.”

As Pepper stood, her untied drawers pooled around her ankles.

“Leave them,” Quinn said. “You will have to earn the privilege of wearing such things. Until further notice, you have forfeited the right to undergarments. We will review the status of this situation daily.”

She stood in front of him, allowing her rolled-up dress to slip back into position. Self-consciously, she rubbed her bottom through the fabric.

“Are we going now?” Her voice was small, almost contrite.

“Certainly not,” Quinn said. “We’ve barely started. Now you are going to strip for me.”

“Strip?” A voice she didn’t recognize asked the question.

“Yes, strip. Nudity is part of the punishment. It reminds you not to hide things from me. Given the roughness of the terrain, you may leave your boots on, but remove everything else. Then I want you to think about what you’ve done to earn this punishment while you stand naked with your hands behind your head.”

Naked. The word ricocheted around Pepper’s head. No man had seen her naked since she was a toddler. The few times she’d experimented with sex in the past, she’d never stripped for her partners.

The thought of standing in front of Quinn nude sent a blush of humiliation over her entire body. For a crazy moment she looked around, wondering how she might escape. But she knew she couldn’t. Look where her first attempt had landed her.

She closed her eyes, took a deep breath, and reminded herself that Quinn probably saw dozens of naked female bodies every week. A powerful man like him could have whoever he wanted, whenever he wanted them. She’d just be another pale-skinned conquest that would blur into the memories of so many others.

His interest might even be clinical, like hers was when she welcomed a new patient to her treatment room. She’d seen a lot of bodies in her many years of training and practice. One thing she knew for sure, her figure was well proportioned, a good combination of soft feminine curves and core strength.

Knowing that her body was taut and healthy, she could disrobe with pride. She closed her eyes and slipped her dress over her head. She had only one article of clothing left on.

“Stop there.” Quinn closed the distance between them. He unclipped her bra from behind and slipped it off.

“Hands behind your head,” he said. “For now, I will keep this. You can have this and your knickers back when you’ve earned those privileges.”