Breaking in Bella by Isabella Laase 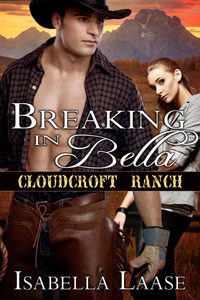 After Bella Mikelson wrecks her car while driving drunk, the spoiled twenty-two-year-old faces a difficult choice. If she wants to stay out of jail and keep her trust fund, she must accept a plea bargain which will require her to spend a year working on a Wyoming ranch under the strict supervision of Jackson Sullivan and his brother Lincoln, two tough, handsome cowboys who will not hesitate to provide the stern discipline she has been missing.

Seeing no other way out of her predicament, Bella agrees to the terms, but it is only a matter of moments before her defiant attitude earns her a painful, humiliating spanking that leaves her cheeks blushing and her bare bottom burning.

As she grows accustomed to life on the ranch, however, Jackson’s firm-handed dominance sets her once-hidden passion on fire, and soon she is yearning for him to claim her properly. But is she just a project for him, or is he ready to be the master she has desperately needed for so long?

She added a frown, but lowered her voice to a quieter protest. “Stop, Jack. This isn’t fair…”

Without warning, his powerful hand connected to her delicate globes in the most personal fashion imaginable and clearly left his imprint on her soft white skin. She moved her hands to cover her bottom only to give him the opportunity to pin them to the small of her back. Effectively restrained by his powerful body, her only avenue of dissension was to return to the language already deemed inappropriate. “Fuck this… you need to fucking stop…”

With nothing in his way, Jack peppered her bottom with relentless attention. The only movement she could manage was to raise her bottom closer to his stinging smacks, and she quickly realized the idiocy of the move.

Her tense muscles tried to anticipate his next connection, but he circled her ass so carefully that she quickly realized nothing was left pristine. To further his point, he moved to the sensitive spot where her ass met the tops of her thighs before he added a second layer of red remorse to her already punished target.

“Your naughty little bottom is going to feel this one for a long time,” he said softly.

When escape and control were ultimately defeated, Bella’s muscles simply adapted to the sting, and she focused on limiting her verbal response to socially acceptable terminology as the redness slowly turned to molten fire. “Stop, please… stop…”

“Such a nice pink color,” he said with frustrating calmness that countered her rising emotions.

About the time she needed to give into his unspoken demands for cooperation, he finally slowed his hand, and Bella breathed a tearful sigh of relief. Without the anger that dictated her past, embarrassment tickled with a burgeoning twist of need as the sting on her bottom further ignited her crazy hormonal response. Her stomach rested against his granite thighs, and her freed hands wiped her eyes and nose with a sad sigh as she considered her next move.

He wasn’t done. Bella had forgotten about the heavy leather belt that waited on the side of the bed. Jack wrapped its length around his hand, and pinned her wrists a second time before the stinging bite filled the room with her simultaneous shriek. Unfortunately for her, she chose to scream, “What the fuck are you doing?”

His efforts reignited the fire that threatened her inside and out while thousands of bees, jellyfish, and Texas fire ants burned their way into her memory. Jack reviewed her long list of misbehaviors and with each transgression, she received another smack from his belt. “You will mind what we say. You will watch your language, and you will not lie to or bite anybody.”

The physical ache between her legs connected to her swollen bottom to fight for the most powerful emotion, but confusion was quickly defeated by her need to offer sincere apologies with as much contrite respectfulness as she could manage. “I… I’m sorry… I… won’t do it again… I… Please stop… sir…” Each painful correction burned into her memory along with the top layer of skin on her ass.

When he finished, her body shuddered gratefully and her breath started its slow climb to normalcy while she sniffled her tears. Afraid to explore the heat, she kept her hands over her eyes in a vain attempt to hide from the whole experience.

As she whimpered in her self-imposed darkness, his tender touch ran over her punished ass. The satisfaction he generated couldn’t be defined, and she took the moment to pull herself together before she had to face him. In her mind, he had delivered his message in a most personal and humiliating action, and she just wanted to disappear into the woodwork to nurse the fire on her virgin backside and the strange need between her legs.

2017-03-05
Chris
Previous: Tamed by the Sheikh by Emily Tilton
Next: Captivated by Jaye Peaches