Bred by the Spartans by Emily Tilton 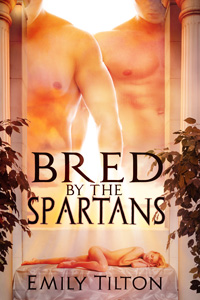 When the beautiful young goddess Thaleia spurns Zeus’ attentions, he has her thoroughly and shamefully punished and then casts her down from Olympus to walk the earth as a mortal woman. Worse still, he places a curse upon her which will overcome any man who sees her with the desire to claim her in the most humiliating ways possible. Her only hope lies in an ancient power stronger even than the gods… Destiny has decreed that if, in spite of the curse, two men can make her confess that she yearns to be theirs, then she will find a happiness beyond her fate.

After Thaleia’s sister throws herself at the feet of Apollo in desperation and begs for his aid, Apollo appears in a dream to Leontes and Theoleon, two of the bravest warriors of Sparta, and commands them to rescue Thaleia. When the men wake and find the girl naked and distressed, they are torn by two equally powerful instincts: to take her long and hard and make her blush with shame, and to love and protect her as their own.

The three journey to the Oracle at Delphi, who gives them Apollo’s prophecy—that the descendant of two Spartan warriors and a goddess will one day save all Greece from its enemies. But if Thaleia bears the son Apollo has foretold and Zeus relents and allows her to return to Olympus, will her love for her two Spartans be greater than her desire for immortality?

“You start, Theoleon,” said Leontes. “Keep that face to the bed, Thaleia. Get on your elbows and push your bottom up for us.”

Feeling herself go even hotter, both with shame and with the arousal that the shame was causing, Thaleia did as she was told, and made her backside even more prominent for the Spartans.

“Let’s get those knees apart, too,” said Leontes. “We like to see a girl’s tender little furrow when we’re spanking her, especially if we know we’re going to have her together afterwards.”

He spanked her steadily with his open hand, giving her three or four slaps in a row in one place, and then moving on to another spot. His hands were enormous, like his manhood, and he struck her hard, so that Thaleia was crying out very soon at the tenderness of her bottom.

He spanked her thighs, too, very hard. Thaleia could tell that he liked to hear her cry out, and that he would spank her in the places that hurt the most until she did. Then, when he knew that he had brought her to her limit there, he would move methodically to another spot, and do the same there.

“Your turn,” Theoleon said, and then Leontes began to spank her. Now the tears were running down her face and onto the rough woolen blanket that covered the sleeping couch. She wondered if the householder and all the servants were listening to her being punished.

“Why are we spanking you, naughty girl?” Leontes asked. He did not spank as hard as Theoleon, but he rubbed between spanks, to make her feel how shameful it was to have to be spanked like a child.

“To teach me about your precious seed?”

“And to teach me about obedience?”

They each whipped her ten times with the strap. It was short and heavy, and it hurt much more than their hands. Thaleia cried out loud at every blow.

Theoleon, again, was first, and his purpose, as when he had spanked her with his open hand, seemed to be to hurt her. The strap found her inner thighs, and even her furrow, again and again, until she rewarded her quiet, brown-eyed Spartan with cries of agony. That used eight of his strokes. Then, with his last two, Theoleon struck her bottom right across it, in a way she felt must be to make his mark there.