Bride of the Trogarians by Ava Sinclair 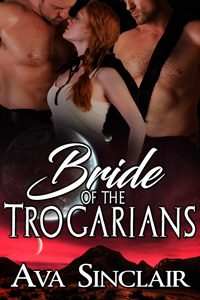 As the nations of Earth collapse into chaos amid a steadily worsening environmental catastrophe, Iris makes the choice to leave her dying world behind and seek refuge on the far-off planet of TraoX39, where human females are in high demand as brides. But upon her arrival, she soon realizes that her new life will be far different than she was led to believe.

Though she was promised the right to refuse any match, when Iris dares to reject a rich, decadent oaf who fancies her, she finds herself in deep trouble. After a humiliating public punishment, she is brought to a remote settlement inhabited by the rugged, battle-hardened Trogarian tribe and given as a gift to their chieftains.

The two huge, handsome Trogarian warriors waste no time in making it clear that Iris is to be their obedient, submissive bride, and when she defies them she quickly discovers that there are punishments much more shameful than a mere bare-bottom spanking. Yet in spite of everything, their mastery of her body sets Iris on fire with passion in a way she has never experienced, and before long she is delighting in being shared by her fierce, dominant mates.

But the Trogarians have powerful enemies, and soon her adopted people are caught up in the scheming of foes as cunning as they are evil. Can Iris help set things right and save the men she has grown to love before it is too late?

Publisher’s Note: Bride of the Trogarians includes spankings and sexual scenes. If such material offends you, please don’t buy this book.

She glared at him through helpless, angry tears. “I knew you were false,” she taunted. “You said you would not force yourself on a helpless woman, but you tie me up.”

“You are wrong. I will not put myself inside you until you are begging me,” he said. “You are tied in such a manner not for pleasure, but for punishment.” Zios picked up another piece of leather now, this one supple and about eight inches long. By the time Iris realized his intent, it was too late. There was a flick of his wrist, and a snap as the tip of the little strap struck the top of her pubic mound. She jerked from the sting, crying out.

“No… don’t!” She wriggled. His eyes were fixed on her pussy. He flicked the strap again; this time it fell on the left lip of her labia. It felt like liquid fire suffusing her entire pubis when a corresponding blow landed on the opposite side.

“Aiiiieeeeeyyyy!” She was writhing to escape what she now realized was worse than any spanking, and more humiliating, even than the plug-and-clamp correction she’d first received. Zios was taking his time, aiming for the silken petals of her inner labia now, striking just hard enough to deepen the sting to an unbearable heat that was both painful but also…

Despite the pain, there was a different kind of heat building now, and each descent of the strap made wet slapping sounds. He was hitting her more lightly now, the punishment going from corrective to teasing. Her inner passage clenched despite the pain, or because of it. The face that looked down at her had adopted a knowing look.

“Don’t!” She’d meant to sound firm, but the word came out as a soft plea. And when he did stop, it was almost worse because Iris found herself writhing before him, her exposed, drenched pussy open and… dear God… hungry for, for what?

2016-09-25
+admin
Previous: Surrendered on the Frontier by Jane Henry
Next: At Her Husband’s Command by Lily Harlem